By Judi McLeod : The supermarket ‘talking’ shopping cart Michelle Obama will use to push her over-the-top approved food list is a power push over unsuspecting masses, but would serve as the perfect replacement for her husband’s omnipresent rising sun logo. 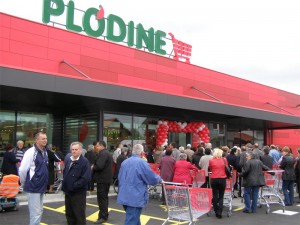 Six years ago, Barack Hussein Obama arrogantly made himself the rising sun in a logo by putting the sun under his stylized ‘O’, but his wife may have inadvertently come up with a better logo symbol to represent the empty life Barack Obama is bequeathing Americans: Michelle’s government-controlled supermarket shopping cart.

Across a post-2008 broken America, the abandoned shopping cart lot is a symbol of poverty in too many neighbourhoods.  The shopping cart, pitifully packed with every scrap they own,  is also a tottering means of conveyance for the legions of the homeless.

Only the most arrogant rulers who would speak down to the proletariat through a Teleprompter could come up with a ‘talking’ shopping cart.

For almost six long years, Barack Obama has worked steadfastly to break America.  His rising sun logo can no longer put a smiley face on it.

Add to the empty supermarket carts found at thousands of abandoned properties in cities like Detroit, Michelle Obama’s specialized supermarket carts that will notify shoppers when they’ve selected the right amount of healthy foods, described in a new 80-page report from the U.S. Department of Agriculture. Now that they’ve lured almost 50 percent of Americans onto food stamps, they feel they have the right to tell them what they can eat

In Case You Missed It:  NYC, DHS will release non-toxic gas at 100-plus locations in preparation for chemical, biological attack: Is Biden's America in danger?
Posted in Freedoms and tagged Freedom, Obama, White House.

What Did US Spy Satellites See in Ukraine?

The U.S. media’s Ukraine bias has been obvious, siding with the Kiev regime and bashing ethnic Russian rebels and Russia’s President Putin. But now...