Economy Minister Naftali Bennett, head of the Jewish Home party, said on Monday evening that Operation Protective Edge should not be stopped until the terror tunnels which lead from Gaza into Israel are taken care of. 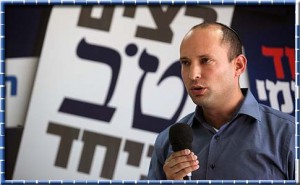 “There are very wide tunnels coming out of Gaza, equipped with a communications system and with electricity and ventilation, through which you can do one of two things – a bombing or a mass kidnapping,” Bennett told Channel 2 News.

“We are currently in the midst of a very important campaign which is succeeding, there are heavy losses on our side but we are successful,” he added.

“The system works, the finest brigades are currently in Gaza and are destroying the tunnels. We should finish this campaign with no tunnels coming out from the Gaza Strip into Israel,” said Bennett.

The comments came hours after ten terrorists entered Israeli territory through one of the terrorist tunnels, only to be eventually eliminated by the IDF.

On Saturday morning, two IDF soldiers were killed when a squad numbering 8 or 9 terrorists emerged from a tunnel near Ein Hashlosha and engaged an IDF motorized force.

On Thursday, 13 terrorists emerged from a tunnel in the Eshkol region, but were spotted and escaped back into the tunnel. It is not clear if they were killed by a bomb that was dropped on the entrance into the tunnel immediately after they re-entered it.

In Case You Missed It:  Proof that the Taliban takeover was not Biden's incompetence But TREASON!
Posted in Israel, Terrorism and tagged Gaza, Hamas, Islam, Israel, Jihad, Missile Defense, Muslims, Palestinians, Terrorism.

Sam, the wealthiest man in his neighborhood, lives in a big beautiful house with a massive backyard punctuated by a...