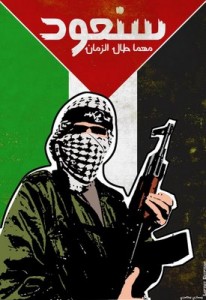 “The only way to deal with this savage regime is to continue resistance and armed struggle and extend it to the West Bank (Judea and Samaria -ed.),” the official IRNA news agency quoted Khamenei as saying.

Iran, which does not recognize Israel, is a supporter of the Hamas and Islamic Jihad terror groups that have been at the forefront of the fighting in Gaza.

Khamenei and other Iranian leaders have been for years attacking Israel and calling for its elimination.

In November, Khamenei said that Israel is a “regime doomed to collapse” and referred to the Jewish state as “the rabid dog of the region”.

Several weeks before that, he called Israel an “illegitimate and bastard regime,” and further called the United States a “smiling enemy” that is not to be trusted.

Khamenei has also denied the Holocaust, saying in March, “In European countries, no one dares to talk about the Holocaust, and we do not know if it’s real or not.”

In May, he accused the Israeli government of being “wicked terrorists” in a series of tweets.

Sen. Graham: ‘Obama Has Become the King of Indecision’