By Judi McLeod :  Even thousands of miles away from Gaza, citizens live in fear.  And that’s just the way Western leaders want it. With their people living in fear, Western leaders escape citizen wrath for their lack of leadership in failing world economies. 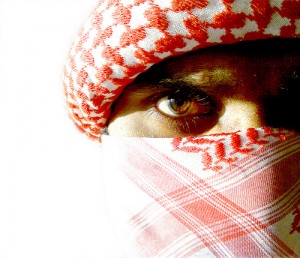 The world is changing and rarely for the better.  One of the biggest changes being that public policy is drafted not in parliaments, not by the European Union, the United Nations or a White House consumed with the destruction of America, but out on the streets with masked activists wearing balaclavas and traditional Arab keffiyeh,  chanting “Israel must die”, “Long Live Palestine” and throwing rocks.

Truth is still the first casualty of war.  Virtually forgotten courtesy of screaming newspaper and website headlines,  the word ‘defense’ is completely missing from what is taking place in Gaza:

“Since the evening of July 17, when Israel launched its ground offensive, Western media has been filled with Hamas propaganda. In the United States, the debate over the conflict is invariably couched in terms favorable to Hamas: Are civilian casualties too high? Is it safe to fly into Ben-Gurion airport? Has the IDF targeted schools and hospitals? One MSNBC anchor calls Israel, which abandoned Gaza in 2005, the “occupying authority.” Another praises a “gutsy” Israeli, who refuses to serve in her nation’s military,” (Matthew Continetti, Freebeacon.com, July 25, 2014)

“On CNN, the Islamist Turkish prime minister says Israel has “surpassed what Hitler did.” A CNN reporter calls Israelis “scum”; a NBC reporter tweets a scurrilous article calling U.S. Jews who join the IDF “America’s Israeli jihadists”; and a writer for Gawker says it’s time to send the Jews back to Germany. Reporters once embedded with military forces. Now the talking points of a military force‚ the talking points of Hamas‚ are embedded in the U.S. media.”

The talking points of Hamas are the same worldwide:

‘Thousands protest Gaza operation in Paris, some with Nazi-like ‘quenelle’ salute’ is the headline is yesterday’s headline in Yahoo News, the fourth largest website in the world.

‘Cease fire ends as Gaza militants resume firing rockets into Israel’ was the Toronto Sun headline 15 hours before this article was written.

The operatives launching rockets at Israel are not militants, they are the terrorists of Hamas.

“PARIS (Reuters) – Pro-Palestinian protesters clashed with police in central Paris on Saturday when thousands of marchers defied a ban by French authorities to rally against Israel’s offensive in the Gaza Strip.

“French interior minister Bernard Cazeneuve warned organizers in a television address that they would be held responsible for any clashes and could be prosecuted for ignoring a ban that was confirmed by the country’s top administrative court.

“A police source estimated the crowds at 10,000, but an AFP photographer suggested the number could be far higher, forcing the closure of roads around Britain’s parliament.

“The march started outside the Israeli embassy in Kensington, in the west of the British capital, before passing Downing Street and coming to a halt outside the Houses of Parliament in Westminster.

“They also chanted “Shame on you David Cameron” as they filed past the British prime minister’s Downing Street office.

“Thousands of people took to the streets of New York City on Friday evening to protest Israel’s offensive in the Gaza Strip and demand an end to the violence that has reportedly killed nearly 850 Palestinians.

“Police scrambled to corral the demonstrators, which officers estimated numbered between 2,000 and 3,000, as they flooded into the busy streets around Times Square.

“Waving Palestinian flags and signs condemning Israel for the offensive, many called for an end to US aid to the country.

“We’re trying to break the siege and end the killing in Palestine. We just want them to live like human beings,” said Ramsey Jamal, 37, a Palestinian-American from Montgomery, New York.

“On his shoulders sat his 8-year-old son, Moses, who carried a placard reading: “Israel I’m just a kid. Please don’t kill me,” alongside marks resembling a child’s bloody handprints.”

“As soon as you talk about Israel, it crystallizes all passions, with up to 20,000 or 30,000 comments sometimes after an article, of which we will only let 5% to 10% through,” explained David Corchia, head of an online moderation company of which both Le Figaro and Liberation (French news publications) are clients.

“Corchia says that as an online moderator, generally 25% to 40% of comments are banned. Moderators are assigned with the task of filtering comments in accordance with France’s legal system, including those that are racist, anti-Semitic or discriminatory.

“Regarding the war between the Israelis and Hamas, however, Corchia notes that some 95% of online comments made by French users are removed.

“There are three times as many comments than normal, all linked to the Israeli-Palestinian conflict,” added Jeremie Mani, head of another moderation company Netino.

“We see racist or anti-Semitic messages, very violent, that also take aim at politicians and the media, sometimes by giving journalists’ contact details,” he added. “This sickening content is peculiar to this conflict. The war in Syria does not trigger these kinds of comments.

“His last comment is particularly significant; as reports come in that 270 Syrians were killed in a massacre at the hands of ISIS, there is little heard around the rest of the world. Where are the rallies and demonstrations? The boycotts? The condemnations?”

The anti-Israel protest is Barack Obama’s Arab Spring come to nightmare life on the streets.

“The Arab Spring is a revolutionary wave of demonstrations and protests (both non-violent and violent) riots and civil wars in the Arab world that began on Dec. 18, 2010”.  (Wikipedia)

Proof of Obama’s links to the anti-Semitic mobs come with his documented association to the anti-Semitic Code Pink, an anti-war organization that both participated in the Gaza flotillas and whose radical members offered themselves as “human shields” to a declining Hamas.

Hamas doesn’t just depend on their own terrorists in the tunnels they built to attack Israel in the Gaza strip.  They depend on the oxygen of the propaganda war being waged in cities around the world.  The men and women hiding behind the masks throwing rocks at police are professors, their students, the malcontents who long have been been part of the anti-war, anti-establishment, anti-capitalist pig crowd ready to join the mobs wherever they gather in any country.

Protected by the anonymity of a balaclava or keffiyeh head gear, you can be as raucous and as anarchist as you choose with no worries of missile strikes.

The face of the street protester has changed over time.

First came the hippies of the ‘60s, now government bigwigs, represented by dozens of unelected czars in the Barack Obama administration.

The mainstream media didn’t seem to notice when the radical environmentalists swapped signs with the anti-war protesters.

The demonstrations and protests of the Arab Spring that began on Dec. 18, 2010, were followed by those of Occupy Wall Street, which went into action on Sept. 17, 2011.

By the time Occupy Wall Street took to public parks, the quintessential protester had only become scruffier, lazier and more willing to occupy city parks for free stuff.

The face masks of the Arab Spring revolutionaries and the Occupy Wall Street are the same, but they now sport the keffiyeh in massive anti-Israel protests worldwide.

It is becoming more clear on a daily basis that Obama wants the same legacy for Israel as he is leaving for America.

The Next Great War

By Alan Caruba :  In the July 24 edition of The Wall Street Journal there was a commentary, “Wanted: Converts to Judaism”...