By Alan Joel:   Obama has called “for an end to a corporate loophole that allows companies to avoid federal taxes by shifting their tax domiciles overseas in deals known as “inversions.” Such as statement shows the utter ineptitude that Obama has for understanding a) what inversion actually is and b) how his policies are the cause. 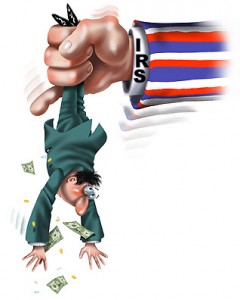 Inversion is not a “corporate loophole” and companies who do so are not “avoiding federal taxes”.

Currently, only the United States taxes American companies on foreign profits as well as domestic. No other major country does this. This policy is non-competitive, stupid, and a major reason why inversion occurs. An American company is being taxed in two jurisdictions.

For instance, if Honda is making cars in the United States, it pays the same taxes as General Motors. But if an American company is in Japan, it has to pay both Japanese taxes and American taxes and therefore has to make an even larger profit just to stay competitive and survive.

If foreign sales grow substantially, a company will find itself paying increased U.S. taxes because it is still incorporated in this country and we tax both foreign and domestic profits. Eventually, a U.S. company may find by moving its incorporation to a different country, it can cease paying U.S. taxes on income that is not generated in the United States — the way every other advanced nation, except for the United States, operates. That extra savings in taxes can be reinvested in the company itself.

Couple this tax law with the fact that we also have the highest corporate tax rate, and also a substantial number of stifling regulatory agencies, and it’s small wonder why some companies choose to move abroad eventually.

To call this a “corporate loophole” is exceedingly disingenuous. For some companies to survive, they may have no choice but to move its legal status elsewhere. American companies are in business to make and do things, not to comply with exhaustive tax policy and burdensome bureaucracy. However, the business climate in this country is difficult and to call a company a “deserter” or “unpatriotic” casts the blame squarely in the wrong place — which is a government that over-taxes and over-regulates. That is the problem, and inversion is a symptom of an anti-business environment.

To insinuate that companies who go through the process of inversion are “avoiding federal taxes” entirely omits the reality that this country is the only country who taxes companies both on domestic and foreign profits. Just because we can tax them this way, doesn’t mean we ought to. Reforming the tax code is a better solution.

“Needing to reform inversion” is merely creating another tax grab for Obama — masquerading as fighting against “bad corporations” in order to pander to the rhetoric of the left. The government continues to run chronic deficits and is considering this measure in order to fleece businesses for extra tax revenue. They already face oppressive taxation and burdensome regulation. Attacking them for doing what they might need to do, in order to stay in business, is repugnant.

Under Obama The Typical Household, Now Worth a Third Less

By ANNA BERNASEK:  Economic inequality in the United States has been receiving a lot of attention. But it’s not merely an...