More than 40 Ukrainian soldiers have abandoned their military posts and crossed into Russian territory, stating that they refuse to fight against their own people, a Russian Federal Security Service spokesperson said. 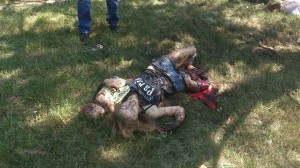 Kiev Bombs murdering many Eastern Ukrainian Civilians including this young mother and her baby.

At least 41 Ukrainian soldiers have made it to Russian territory after asking self-defense forces for help, the spokesperson from the Federal Security Service’s Rostov region border patrol unit, Vasily Malaev, told Itar-Tass. “At around 20:30 Moscow time, 41 Ukrainian soldiers left their military bases and arrived at the Ukrainian border crossing checkpoint Izvarino. They appealed to the militia there for help to with cross into the Russian territory, in connection with the fact that they do not want to fight against their own people,” Malaev said. All of the soldiers were able to cross into Russia at the Donetsk checkpoint, the spokesperson added. Meanwhile, a Russian hospital near the Ukrainian border has been treating wounded Ukrainian soldiers. Some of them have expressed their unwillingness to fight for the Ukrainian army, blaming mobilization laws for forcing them to do so. “I wouldn’t want to. We don’t know who we are fighting. I have no animosity towards Russians. I am not a nationalist, I am not Right Sector,” Ivan, a Ukrainian soldier, told RT. “What right do they have to make us fight? I was mobilized, I received wounds to my hands and now I have to go and fight again with cardboard equipment. They reuse old ammunition and make money off us. The country is falling apart, but for them everything is fine,” he added.

In Case You Missed It:  Give us this day, our daily INFLATED BREAD
Posted in Freedoms and tagged Eastern Europe, Europe, Revolution, Ukraine, War.