The wave of anti-Israel and anti-Semitic hatred has sprung all over Europe readily seizing the pretext of the completely justified Israeli military operation in Gaza. Mass demonstrations in London and the other cities of the United Kingdom, violent riots in Paris, ‘Kristallnacht’-style attacks on synagogues in France, Ireland and Poland, public hate preaches of imam calling for the death ‘the Jews until the last one’ in Berlin, abrasive threats to Jewish people in Denmark and Sweden; all this amassing daily. 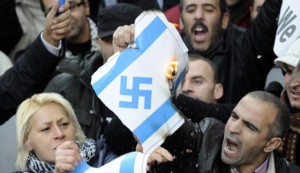 The things are better in the USA, but  there a well Jewish people are threatened because of their national origin ( in Chicago) and where many anti-Israel and anti-Semitic demonstrations have been snow-balling.

As occurred numerous times before, Israel, under non-stop missile attacks by Hamas is presented as a very bad cop; as always, the die-hard left is indulged in calling white black and preaching to Israel to make peace with a cannibal. What’s new in all those anti-Israel and anti-Semitic activities all over the world this time, is the substantially larger number of demonstrators – just everywhere; their determination; their rather high level of confidence and aggressiveness; and largely prevailing Arab and Muslim presence among the attackers and demonstrators.

What we are experiencing today in Europe and the West,  is a wave of articulated hatred towards Jews, and Israel, in that order; and also a substantially higher arrogant confidence on the part of the attackers and demonstrators. They are acting in a much bolder way, also demonstrating to us all quite intentionally: we are here, it is within our rights to do whatever we want – and they are indeed allowed to spread all this hate and conduct all these attacks by the European and Western governments who remain largely meek towards racial violence peaking up in their countries.

This is the result of the more than 25 years of extremely short-sighted and inept policy, or actually, absence of firm stand and articulated policy of the European and Western governments on the issue on militant Islam’ spreading and planting roots in the West.

On the very serious issue on the Islamic presence in the Western world, Europe was dangerously blind to a highly risky lead. During past quarter of century, the process went from initial welcoming of the steadily increasing mass of hardly checked Muslim incomers, young and mid-aged males mostly, into the European and Western space, to pandemic appeasing of enforced militant Islam all over Europe.

Eleven years ago, a year and a half after  9/11, I published the analyses of the then-new security situation in, Europe: A Dangerous Place to Live which had been cited in many books and dissertations, and in which I pointed out many of the phenomena that were appearing then and had high potential to develop into security nightmares, including the second and third generations of the militant Islamists born in Europe and becoming sworn enemies from within as they would be heavily indoctrinated.

As we know, that is exactly what has happened – but the Western governments have just noticed it now, and only because the European Islamists became involved in the Syrian conflict.

A decade later I wrote the next analysis on the same theme, focusing on the objective criteria for safety and security, and the dynamics of the process. The study “Islamisation of Europe: its Origin, Process, Objective and Consequences” was presented at the Institute of the World Politics in Washington D.C. in Spring 2013. I do not remember when I was depressed so much as while I was working on that study, collecting, reading, watching and systematizing all the material.

The process of massive, premeditated conquering of the West by the fanatical militant Islam had progressed enormously and had been advanced very much since the scheme was conceived by the Muslim Brotherhood and other similar organizations in the late 1960s. They developed their strategic initiative and tactical agenda in late 1980s,  followed by the quality change of the whole process brought by the crucial act of Al-Qaeda in 9/11 attacks.

Statistics show that 6% of all population of Europe today is Muslim, with over 44 million Muslims living in Europe. That statistic includes a large Russian population, and also the places wherethe  Muslim population is indigenous as is the case for Bosnia, Macedonia, Montenegro, Kosovo and the other places in the Balkans, with over a million Muslims (13,4% ) in Bulgaria, and over 200 thousand (22,7%) in Cyprus. The later are both members of EU, with all the absence of border control, and extremely light security  which did led to the terror attack against Israeli tourists in Burgas airport in 2012.

All in all, Europe has the Islamic population of Saudi Arabia within its borders now. No wonder that hate-preachers of fanatical Islam are bragging now that “Europe does not even realize how small it really is, from our point of view”. In all these countries, except Spain, Islam had been totally alien and had been artificially brought into the space of completely different cultural, sociological, psychological and every possible tradition, values, practices and way of life.

Of course, not all the European and Western Muslims are militant fanatics. But there are too many of those who are, and who are thriving in Europe practicing their hateful violence. This tendency is continuously strengthening as we are see daily – and are hear from the imams’ preaching  from London to Berlin.

At last there are the many briefings of finally alarmed Western governments who can see now the real threat to the home-countries by their indoctrinated citizens who have also been trained on the Syrian and other battlefields and are shuttling between the West and Middle-East and Asia perpetually.

My study, stuffed with many facts and evidences, had been met with serious attention. Some of the Members of the European Parliament immediately decided to run a special hearing on the paper,  drafting and accepting the policy paper on the issue, vital for the security of the over 750 million people of the EU states. The hearings were planned for autumn 2013 but we are still waiting.

I do not know the other case in history when so imminent and so tangible danger – not to one or several groups of a population, but to the entire societies of people on their own land – has been ignored so blindly and so enthusiastically as it has under the guidance of the leadership of the foreign policy of the European Union under its outgoing boss, unelected appointee Mme Ashton and by both Obama Administrations, with the second one being completely unqualified and dangerously ignorant when it comes to matters of the Middle-East, and the speedy spread of the militant Islam all over the West.

Unlearned lessons did lead to the inconceivable yet few years ago success of ISIS/ISIL, that now threaten to undermine the entire Middle East very substantially, to only advantage of Iran.

Distinctively, the hate-wave which is now spread all over European and the West emphatically targets  the local Jewish population there, with outpouring threats and applied violence towards the European and Western Jewry one day after another. Coming alongside and at the same time of the unprecedented rise of the neo-Nazis and ultra-right movements all over Europe – and this is largely thanks to the increasing advance of Islam in Europe – it creates an atmosphere in Europe and the West which has potential to become even worse than the mortal attack on Jewish people orchestrated by Nazis and Hitler, – simply because now the Jews are attacked by several different forces, and because there is no clear division between aggressors and defending forces of allies, but people are hated, targeted and attacked in all European and many Western countries only because they are Jewish. Welcome to the Middle Ages.

All this hate, violence and drive for destruction and annihilation focuses on Israel, which is an embodiment of the strength, pride and statehood of the Jewish people whenever they are living.  Whenever Israel advances on those who are trying to harm her, the hate-waves in Europe and the West are and will become hotter and more voracious.

The point here is that with current degree of the Islamiaation of the West, these waves will not be ebb. There will not be a calm sea in European and Western life towards Jewry and Israel until the Western leaders and their government elaborate and implement a tough stand and adequate, firm policies protecting their citizens.

This is the matter on which Israel and its allies in the world, the European and world Jewry shall be united to bring it to the top of the international policy agenda. We all, on the state, government, parliament and public levels shall insist tirelessly that this urgent matter of international safety and security must be implemented, without bargains of any sort, by the world leaders and their governments.

There is simply no alternative to that, in order to handle those growing hate-waves that have risen over the horizon of the world as we know it.

Ed. Note: Just received from Ms. Anne Willner in Helsinki: A pro-Israel rally took place on Thursday 24 July in Helsinki, the capital of Finland. More than 1000 loyal friends showed their support to the brave nation of Israel that – over and over again – has to fight for its legal right to exist, have safe borders and guarantee the Israelis a peaceful life. The rally took place in front of the parliament building. Several well known politicians participated in the rally, as well, and loudly claimed, that Israel has the right to protect its borders and citizens and that Hamas aggressive and cowardly hostility must be stopped immediately.

Though Arab and Jew are by lineage the rival sons of Abraham, any connection binding their brotherhood seems to have...