Yet another open call for genocide of the Jews, airing on Hamas’s TV channel. Where is the international media? Too busy repeating Hamas propaganda to take any notice. 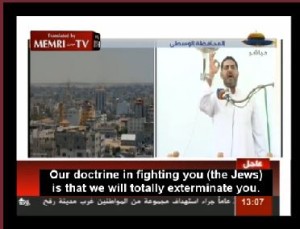 “Hamas Sermon from the Gaza Strip: Our Doctrine Entails Exterminating the Jews,” MEMRI,

Al-Aqsa TV, the Hamas TV channel, aired on Friday, July 25, 2014 a sermon from a Deir Al-Balah Mosque, in which an unnamed imam called for the extermination of the Jews. “We will not leave a single one of you alive,” declared the imam.

“Our doctrine in fighting you (the Jews) is that we will totally exterminate you. We will not leave a single one of you alive, because you are alien usurpers of the land and eternal mercenaries. You are the mercenaries of all times. Research the history, my brothers. Wherever the Jews lived, they spread corruption. Oh Muslims, didn’t you notice that Allah said: ‘They spread in THE land…’ The definite article in ‘THE land’ means the entire land. ‘They spread in the land corruption, and Allah loves not the corrupters.’”

And the penalty is clear: “Those who wage war against Allah and his messenger and strive to spread corruption in the land should be punished by death, crucifixion, the amputation of an alternate hand and foot or banishment from the land: a disgrace for them in this world, and then a terrible punishment in the Hereafter” (Qur’an 5:33).

Robert Spencer:  In his message to Muslims on their holiday Eid al-Fitr, issued Sunday, Barack Obama asserted that “Eid also reminds us...