There should be no sympathy for a terrorist aggressor like Hamas who fires thousands of rockets indiscriminately into largely populated centers in Israel, targeting civilians. 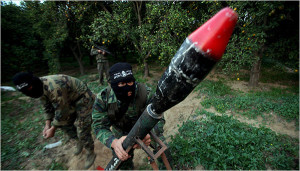 Hamas terrorists should be denounced by everybody because they follow none of the rules of war. They use civilians as human shields, demonstrating their blatant disregard for human life. Hamas’s tactics are those of the cowardly and should be strongly condemned by the U.N. and by all self-respecting countries around the world (more on the U.N. later).

What is going on in the Middle East is not a war, it is a hunt against a sub-human terrorist aggressor who rejects modernity, civilization, and liberal values, and whose main objective is to destroy another people.

Some networks in the media are trying to create a moral equivalency between Israel and the terrorist Hamas. Why do they do it? In my estimation, it can only be explained two ways: either they are conditioned by years of leftist ideological indoctrination, or they are nothing more than bought-and-paid-for mouthpieces carrying the water for their corporate masters.

Personally, I would be ashamed to work as a reporter for a news organization that tries to influence public opinion by continually showing images of the dead and the injured without contextualizing those images, without explaining why these attacks occur and who is responsible for these civilian casualties. This is outrageous and irresponsible reporting by any measure. It demonstrates how little the political demagogues in the media care about reporting the truth. They care more about pushing their leftist political agenda. Truly disgraceful.

If you look at the bigger picture, there is little doubt that the rise of Islamic terrorism is the single most important global security threat facing the civilized world today. We see it rise everywhere, in Syria, Libya, Nigeria, Somalia, Egypt, ISIS in Iraq, etc. We see the rise of anti-Semitism in Europe and even in some parts of North America. We see the persecution of Christians in Iraq by ISIS. These issues will eventually have to be addressed by world leaders. If we truly believe in civilization and the liberal values of modernity, it will become a moral imperative to take action against religious extremism.

Why doesn’t Pope Francis react to the persecution of Christians in Iraq?

Why doesn’t Pope Francis react to the persecution of Christians in Iraq? Seems to me the Pope and the Vatican should be addressing this issue every day. Pope Francis has said that he worries about the treatment of illegals from Central America crossing the border into the U.S., yet he remains silent on the atrocities committed against Christians in Iraq. Let me be perfectly clear on this point : the illegals crossing the U.S. border will be cared for. They will be treated humanely because that is the nature of a civilized country who believes in human compassion. It is not the illegal children arriving in the U.S. that should be the focus of the Vatican, it should be the Christian children of Iraq. These Christian children in Iraq (and elsewhere) are being persecuted simply because they are born in the Christian Faith.

Here’s my proposal for dealing with the rise of Islamic terrorism in the world. It should start with ISIS, the Islamic terror group who has taken over major parts of Iraq. The only real superpower in the world, the United States of America, should launch a bombing campaign targeting ISIS. This bombing campaign should be unrelenting and sustained, day and night, until this terror threat is eliminated. This would send a clear message to other extremist Islamic groups who wish to spread terror and commit genocide in the world. And if they rebuild or evolve into another faction, then you start the bombing again, until that faction is eliminated as well. We know terrorism cannot be eradicated completely, but it can surely be marginalized.

As far as the conflict between Israel and terrorist Hamas, there can be no moral equivalency. Any rational nation would defend itself when it sees a barrage of missiles launched on its major cities, like what is currently happening to Israel. To demonstrate that there can be no moral equivalency, I’ll cite just one short passage from the Hamas Covenant or Charter, issued on 18 August 1988. Article Seven: The Universality of Hamas. It says:

“The Hamas has been looking forward to implement Allah’s promise whatever time it might take. The prophet, prayer and peace be upon him, said: The time will come until Muslims will fight the Jews (and kill them); until the Jews hide behind rocks and trees, which will cry: O Muslim! There is a Jew hiding behind me, come on and kill him!

In the name of fairness, I am sure the media can find the same hateful text in the Israeli Charter or Constitution. I was not able to find any such evidence myself, but it must exist somewhere, right? I’m confident the media will find it.

The message to the UN would be crystal clear: reform or face irrelevancy.

On another note, I would like to address the United Nations. I think it is time for all democratic nations who hold as their core values liberty, free market capitalism, the rule of law, private property rights, basic human rights, to unite against the UN and denounce their blatant demagoguery against the nation of Israel, a nation who is defending itself against a terrorist aggressor, a nation who is trying to dismantle the Hamas terrorist infrastructure in the Gaza strip. All these liberal democratic nations should take a stand against the UN by leaving it and forming their own coalition of nations, a coalition whose main purpose would be to defend liberal values around the world. The message to the UN would be crystal clear: reform or face irrelevancy.

Another issue that is almost completely ignored by the media is this barbaric ritual of female genital mutilation in Iraq. Where is the feminist movement denouncing this barbaric practice? Maybe I missed it, but I don’t see anyone talking about this in the major media, either on television or elsewhere. Where are the feminist politicians and journalists, and why are they ignoring this issue?

In conclusion, I ask you this question: If the Pope remains silent on the ongoing persecution of Christians, if the UN won’t act on Islamic terrorism, if feminist groups won’t stand against female genital mutilation in Iraq, if the president of the most powerful nation in the world won’t use the military might at his disposal to protect and defend the civilized world against the threat of terrorism, and if the media won’t report on any of these issues because of political correctness and leftist conformism, then where can we turn for leadership?

With the shoot-down of Malaysia Airlines Flight 17 over Ukraine turning a local civil war into a U.S. confrontation with...