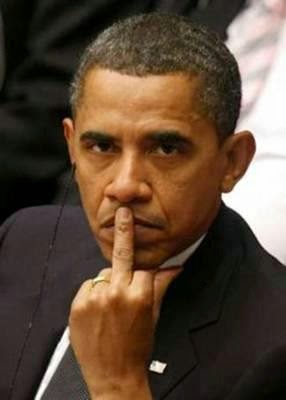 By John W. LillpopMuch infighting and consternation among conservative patriots these days revolves around the pressing moral, legal, and spiritual issue of our times: Shall we the people sue Barack Obama in a court of law for his failure to faithfully execute the laws, or shall we impeach his Unholiness for high crimes and misdemeanors in the hallowed halls of Congress? Decisions, decisions, decisions!The least rigid among us will be tempted to take the path of least resistance (sue, baby!) for fear of jinxing what at this point looks like an almost certain electoral trouncing of Obama and his progressive agenda when the polls of freedom open on November 4. More strident right-wingers refuse to have anything to do with tepid actions against the foremost purveyor of anti-American tyranny in the history of the US presidency, and thus argue vociferously for nothing short of Comrade Obama’s arrogant, narcissistic head on a bloodied platter of Impeachment.Metaphorically speaking, of course!Mind you, they DO make a compelling argument!Still, calmer, cooler heads would be well-advised to pursue  a third option: Let’s do both!That is, before the November 4 day of judgment, Congress should put on a full-court press to sue Barack Hussein Obama into oblivion for Unconstitutional gerrymandering of Obamacare, an established law, which, although unworkable and fatally flawed, was nonetheless in force.Obama’s countless unilateral, post-codification modifications so as to curry favor with labor unions and other special interests is among the most outrageous examples of unfettered tyranny in America’s history.Sue baby, sue!Then, after the November 4 rendering, and the obligatory swearing-in of the new Congress, with both the US Senate and US House once again in the hands of Americans, Articles of Impeachment could be drawn to put Barack Hussein Obama in his rightful place as a man bereft of Democratic principles, but fully steeped in high crimes and misdemeanors!While Obama would probably escape conviction and ultimate removal from office, watching this evil madman “twisting in the wind” for the final two years of his undeserved and fraudulent term in office could revive the American spirit for decades!What to do? Sue AND impeach!

What In The World Are They Thinking?

By Jim Yardley: Could some lawyer reading this please tell me how willfully and publicly flouting federal law is not punished?  I...