Terrorist confesses he trained in Malaysia to conduct raids on Israeli civilians from the air; 100 Hamas men captured to date. 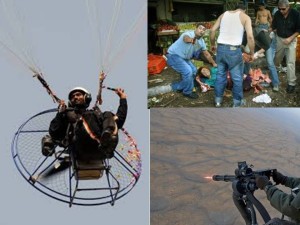 A highly trained Hamas operative captured by the IDF during the ongoing military campaign in the Gaza Strip told investigators that he had prepared to carry out a terror attack against Israeli civilians using a paraglider, the Shin Bet security service said Wednesday

The Hamas detainee, who was recruited to the Islamist terror group in 2007 and joined one of the group’s special units in 2010, had taken part in a weeklong military-style exercise in Malaysia, along with 10 other members of the group, the Shin Bet said in a statement. During the exercise, which included paragliding training, the Hamas squad focused on perfecting raids from the air.

The squad conducted a second training session in the Gaza Strip earlier this year, the statement said.

The Hamas operative was arrested near the Palestinian city of Khan Yunis, in the southern Gaza Strip, on the night between July 21 and July 22.

A second Hamas operative held in Israeli captivity told investigators that after the IDF began striking targets in Gaza, he received orders to enter an underground tunnel and await for further commands, Walla reported. For weeks, the operative said, he survived only on dates and water, which were brought to him by two fellow Hamas members. On the third week of the Israeli offensive, after receiving no orders, the operative, a member of Hamas’s elite Nukhba unit, exited the tunnel and surrendered to IDF soldiers in the area.

Since launching a ground operation in the Hamas-controlled enclave on July 17, the IDF has apprehended close to 100 operatives, mostly members of Hamas and Islamic Jihad. Soldiers also seized hundreds of computers, maps, and communication devices, as well as weapons.

Palestinian sources said that at least 76 people were killed Wednesday in Israeli strikes across Gaza, raising the Palestinian death toll above 1,300 since the IDF first started operating in the Strip. Israel asserts that hundreds of those killed throughout the operation were Hamas or Islamic Jihad fighters.

Why Not Sue AND Impeach?

By John W. LillpopMuch infighting and consternation among conservative patriots these days revolves around the pressing moral, legal, and spiritual...