With concerns growing over the deadly Ebola virus, which has killed 670 people in West Africa, The Obama Administration has preparations underway in the United States, where even healthy Americans will be subjected to forced quarantine in the event of an Ebola pandemic. 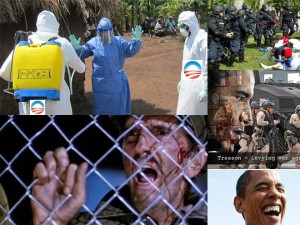 Western governments are now issuing alerts to doctors to be on the lookout for symptoms of the disease after an infected Liberian man was found to have traveled through a major transport hub in Nigeria. The World Health Organization has called the outbreak the worst on record, while Doctors Without Borders says the situation is “out of control.”

Back in April, the Department of Defense announced that it had deployed biological diagnostic systems to National Guard support teams across the U.S. in readiness for any potential Ebola outbreak.

The Centers for Disease Control and Prevention (CDC) has procedures in place to deal with such an outbreak backed by force of martial law.

The official CDC website details ‘Specific Laws and Regulations Governing the Control of Communicable Diseases’, under which even healthy citizens who show no symptoms of Ebola whatsoever would be forcibly quarantined at the behest of medical authorities.

Such stringent regulations have led to fears that an outbreak of a dangerous communicable disease in the United States would lead to massive abuse of power by the federal government and the imposition of martial law.

The Common Sense Show’s Dave Hodges points out that the seriousness of the Ebola threat makes a mockery of the Obama administration’s current immigration policy.

“Even if there was not a present immigration crisis at the border, there is a significant outbreak of Ebola in a seven country region of West Africa,” writes Hodges. “With modern air travel, this government should be enacting protocols to limit the chances for Ebola from coming into the United States. Instead, President Obama is having ICE and DHS load up the busses and planes, at taxpayers expense to ship them throughout the United States without going through a minimum of a three week health screening period (i.e. Ebola’s incubation period).”

World Net Daily’s Drew Zahn highlights the fact that that some of the individuals detained while trying to cross the U.S. border from Mexico were Africans.

“All it would take is one sick passenger or an illegal alien crossing our border to start a local outbreak in the United States,” warns the One Citizen Speaking blog, which calls on Obama to “impose travel restrictions on flights from and to the stricken area – unless they were humanitarian flights and closely monitored.”

Obama, Your Own CIA Says What Russians Say. What Are We Gonna Do?

Why did President Obama look so lost Monday while trying to make a case against Russia in the downing of...