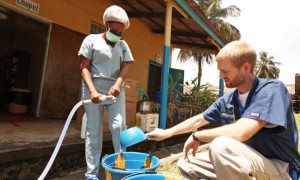 I just heard on National Public Radio two things that have totally destroyed what tiny bit of belief I still had in American leadership. I have concluded that the term “intelligent American” is an oxymoron.

American elites have decided that Americans are not sufficiently threatened by war and economic chaos, so they are bringing the ebola virus to America. National Public Radio reported that two people infected with the ebola virus, which cannot be cured and is usually deadly, are being brought to Emory University Hospital in Atlanta, Georgia.

All it takes is one cough, one sneeze, one drop of saliva, and the virus is loose in one of the main transportation centers of the USA. US Doctor Kent Brantly, 33, fell ill despite wearing full protective gear.

Pandemic anyone? Little doubt but that most of the world would emit a great sigh of relief to be rid of Washington.

Allegedly the ebola carriers will be quarantined in special rooms. But we already know that American hospitals cannot even contain staph infections. http://rt.com/usa/177408-nightmare-bacteria-antibiotic-southeast/ What happens to the utensils, plates, cups, and glasses with which the ebola infected persons eat and drink? And who gets to clean the bed pans? One slip-up by one person, one tear in a rubber glove, and the virus is loose.

If we don’t die from ebola, we still have to dodge nuclear war. I heard part of Obama’s press conference. Obama accused Putin of doing everything that only Obama is doing.

If Obama believes what he told the press, he is utterly disinformed by his advisors. If he doesn’t believe the crude propaganda that he speaks, he is consciously leading the drive to war with Russia which probably means war with China as well and the end of us all.

Russia and China are not Iraq, Libya, or Afghanistan.

War with Russia will be nuclear. Washington has prepared for it. Washington has abandoned the ABM treaty, created what it thinks is an ABM shield, and changed its war doctrine to permit US nuclear first strike. All of this is obviously directed at Russia, and the Russian government knows it. How long will Russia sit there waiting for Washington’s first strike?

When Washington drew a “red line” in the sand with regard to the Syrian government’s use of chemical weapons against the outside forces that Washington had organized and sent into Syria to overthrow the government, all the while pretending that these Islamists mercenaries were the true spokesmen for democracy in Syria, most of the world knew that Washington was about to organize a chemical attack and blame Assad. When the Washington orchestrated attack happened on schedule, this time Russia and China did not fall for it. And neither did the British Parliament. Washington was unable to produce any evidence for the charges that Washington made and hoped would bring in at least the British to support Washington’s military assault on Syria. Russia, however, was able to produce evidence, and the evidence foiled Washington’s plot against Syria.

Russia’s intervention angered Washington, as did Russia’s intervention that blocked
Washington’s plot to attack Iran. Washington, devoid of all evidence and in contradiction to the reports from the International Atomic Energy Agency from inspectors on the ground in Iran that there was no diversion of uranium from the legal energy program to a weapons program, had Iran set up for attack. Iran was surrounded by about 40 US military bases and two of Washington’s fleets off its coast.

But in stepped Russia and worked out a deal, which Washington had to accept, that kept Iranian uranium enrichment at the low level used for energy, a level far below weapons requirements.

Two black marks agains Russia whose government prevented wars that Washington wanted. Russia (and China) were supposed to endorse Washington’s lies like the puppet states of Europe, Canada, Australia, and Japan, countries that long ago gave up their sovereignty to Washington.

Unfortunately for Russia, Russia demonstrated that Russia had achieved sufficient power and influence to block Washington’s war plans and, thereby, brought into action against Russia the Wolfowitz Doctrine. I have cited this doctrine in recent columns, but you can google it and read it for yourself. The doctrine is the basis for Washington’s foreign policy and declares that the principle goal of Washington’s foreign policy is to prevent the rise of any country that could serve as a check on Washington’s hegemony over the world. (The doctrine explicitly mentions Russia but also applies to China.)

Washington is disturbed that Russia has twice foiled Washington’s war intentions and that the Parliament of the US Puppet State of Great Britain voted with the Russians.
Washington is also concerned with the growing economic and political relations between Washington’s EU puppet states and Russia. EU countries, especially Germany, have numerous and profitable economic connections with Russia, and all of Europe is dependent on Russian supplied energy.

Washington concluded that Washington was in danger of losing its control over Europe.
While the Russian government was asleep at the switch enjoying the Olympics, Washington pulled off its coup in Kiev.

Neoconservative Victoria Nuland, appointed by Obama as Assistant Secretary of State,
announced at a press conference last December that Washington had spent $5 billion
purchasing fifth column Ukrainian NGOs that can be put into street demonstrations to destabilize a government and on grooming and purchasing Ukrainian politicians who will serve as Washington’s stooges. Nuland, of course, described Washington’s purchase of Ukraine as “furthering democracy” in Ukraine.

Washington’s coup against a democratically elected government brought to power extreme elements that proclaimed their hatred of Jews and Russians. These elements destroyed Russian war memorials erected to remember Russia’s liberation of Ukraine from the Third Reich, passed legislation outlawing Russian as an official language, and engaged in violent physical attacks on the Russian speaking population.

Ukraine has always been an area of changing borders. As some have put it, “Ukraine is a country in search of borders.” When Ukraine was a Soviet province, Soviet leaders attached, for various reasons, traditional Russian provinces to the Ukraine Socialist Soviet Republic. When the Soviet Union collapsed in 1991, pressure from Washington on a weak Russia resulted in the separation of Ukraine from Russia and this included Crimea, a part of Russia since the 1700s and Russia’s warm water port.

The Russian government accepted the request from Crimea, but not the requests from the other former Russian provinces in order to demonstrate to Europe that Russia was not provocative and not the source of the crisis. Putin even had the Russian Duma rescind his power to intervene militarily in Ukraine in order to protect the secessionist provinces.

This restraint hurt rather than helped the Russian government’s position. Washington
used its propaganda machine to label self-determination by Crimeans as “invasion and annexation by Russia of Crimea.”

Washington is not interested in the truth, and Russia cannot win a propaganda war with Washington which controls the world language, which is English, the language of Washington’s propaganda. The Western media consists of idiots who are enabling Washington’s drive toward war and the extermination of life on earth.

If the Russian government had accepted the separatist provinces request, there would be no war. The Ukrainian government is demented and controlled by Washington, but it is not going to attack territories acknowledged by Russia as its territory.

What Obama meant in his White House Press Conference today (August 1) when he said that Putin should use diplomacy–which Putin has been using to no effect–is that Putin should hand Crimea, over the objection of Crimeans and the Russian people, to Washington’s puppet government in Kiev so that Washington can evict Russia from its warm weather port and access to the Mediterranean Sea, thus making redundant Russia’s naval base at Tartus, Syria. Obama also wants Putin to send into the separatist areas of Ukraine, areas that traditionally were part of Russia, Russian military forces to subdue the breakaway territories for Washington’s puppet government in Kiev.

This is Washington’s “diplomatic” position. Only a totally demented person could regard Obama’s position as realistic.

As a person who is considered fair-minded by world media and who arrives at reasonable conclusions independently of Washington’s propaganda, I am often interviewed by foreign as well as US independent media organizations. As of late, the Russian media has turned to me on a number of occasions. What I have learned is that the Russian media is perplexed by Washington’s hostility to Russia.

As Russians, except perhaps for the government, are unaware of the Wolfowitz Doctrine, they do not know that the main goal of Washington is to prevent the rise of all other powers that could limit Washington’s role as sole Unipower, Hegemon over Earth.

Instead of realizing the real threat, Russian media organizations ask me if the Russian budget can stand responding to sanctions from Washington and the EU by cutting off the energy supply to Europe.

Each time I hear this question I am astonished. Russia can shut down much of European industry and deprive the Europeans of heat in winter, and Russian media ask me if Russia can afford it?

Can Russia afford to be demonized by lies, to be driven into the ground by propagandistic sanctions that will hurt Europe and some US corporations, to convey the
image that Russia is so weak as to be helpless in the face of Western sanctions as to accept the sanctions without demonstrating the cost to Europe and the US?

Does Washington even have Russians brainwashed?

Russia has as many nuclear warheads as Washington, and Washington’s “ABM shield” is a farce. If the insane American government drives a crisis, which Washington alone created, to war, we will all die, and for what? The answer is: for a Washington LIE.

Do you want to die for a lie? Another Washington lie?

If you don’t, you had better let Washington know.

Russia cannot end this crisis unless it puts its foot down. I have previously made the case that Russia should take its case to the UN. Alternatively, the Russian government needs to engage Europe in two questions. One is does Europe want its energy supplies from Russia cut off, energy that Washington, despite its lies, cannot replace for 3 or more years if at all.. The other is does Europe want war with Russia and does Europe think that those idiotic countries that host Washington’s missiles won’t be nuked and exterminated?

The crisis in Ukraine will continue to Russia’s and all of humanity’s cost until Russia explains to the stupid, arrogant, hubris-filled West that the West’s criminal and aggressive actions against Russia bear a real cost, and that Russia is prepared to impose the cost.

It would help to save life on Earth if China also made this clear.

The sooner the better.

Unless the world reins in the demented criminals in Washington, the world has signed its own death warrant.

In Case You Missed It:  Another Hip-Hop Superstar Claps Back Against Mindless Compliance: Rihanna Follows Nicki Minaj in Standing Up for Free Thinking; Wears Anti-Censorship Slogan T-Shirt in NYC
Posted in Freedoms and tagged Health And Human Services, United Socialist States of America, US Citizen.

Amendment comes in wake of Ebola scare. As the Ebola outbreak continues to cause concern, President Barack Obama has signed...