The United Nations, predictably, has condemned Israel for defending itself, suggesting that Israel may have committed war crimes in fighting to protect its citizens from rockets and terror tunnels as Hamas hides and fights among Palestinian civilians. In fact it is the UN itself that is likely to have committed war crimes in this conflict, and it should be subject to criminal inquiry. 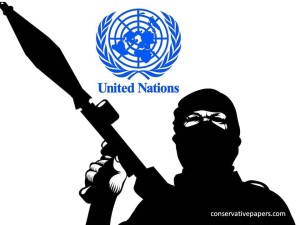 Specifically, the UN Relief and Works Agency (UNRWA) should be investigated for the crime of hiding weapons in its Gaza schools—offensive weapons, at that, which have no purpose other than killing Israel civilians. Three schools have “discovered” rockets so far, and though UNRWA denies it, Israel suspects UNRWA has given the rockets back to Hamas—the “local authorities.”

“Once is happenstance. Twice is coincidence. The third time it’s enemy action,” as Ian Fleming put it in the James Bond novel Goldfinger. It is highly unlikely that personnel at UNRWA were unaware that Hamas was storing rockets at their schools, especially given the long history of association between UNRWA and Palestinian radicals. Some may have helped enthusiastically.

A year ago, Breitbart News broke the story of how UNRWA summer camps were being used to indoctrinate Palestnian children to hate Jews and join the jihad against Israel. Instructors taught children to blame “the Jews” for Palestinian troubles, and to believe that “only guns will give us motivation to return to our lands.” Video provided troubling evidence of UNRWA’s complicity.

UNRWA is the UN refugee agency created specially for Palestinian refugees of the 1948 war—a war the Palestinians started, together with other Arab states, in an attempt to crush the fledgling State of Israel (rather than declaring a Palestinian state). The definition of “refugee” used by UNRWA is much broader than usual, maximizing the number of Palestinians who qualify.

At the very least, the UN ought to investigate how Hamas rockets found their way into UN institutions, how many facilities were compromised, and who is responsible. That inquiry ought not depend on a parallel inquiry into Israeli or even Palestinian conduct. The UN has a unique status and bears a special, singular responsibility. Funds should be withheld until it complies.

In Case You Missed It:  Freedom of Speech, Just an Illusion?
Posted in Terrorism and tagged Crime, Gaza, Hamas, Terrorism, United Nations.

Last month’s Kaiser Health Tracking Poll found that more than half of Americans view the law unfavorably, an eight point increase from...