TO UNDERSTAND why Israel fights in the Gaza Strip, try this thought experiment: 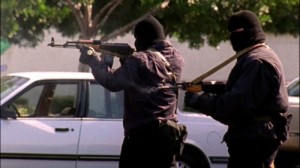 Imagine that Mexicans loudly and violently demand that America vacate the territory that Mexico previously controlled in the U.S. Southwest. To make their case, Mexican revanchists brutally attack American diplomatic posts, assassinate U.S. officials, and even kidnap and kill American athletes at the summer Olympics. Despite such bloodshed, these Mexicans gain supporters among anti-American governments and elites worldwide.

Caving into this pressure, America gives the Mexicans San Diego. Dubbed “Land for Peace,” Washington’s concession would let Mexicans manage that city and show how they might govern if granted a “right of return” on even larger, previously Mexican lands.

While most Americans leave San Diego quietly, the U.S. military ejects holdouts from their property and removes them just before the Mexicans move in.

San Diego’s Mexican citizens soon reject the comparatively tame Institutional Revolutionary Party and elect leaders from the radical Zapatista Army of National Liberation. As its recent communiqué declares: “The anti-capitalist struggle below and to the left continues.”

Before long, the Zapatistas start firing rockets into surrounding areas. Elsewhere in San Diego County, Orange County, and even Long Beach, Americans repeatedly dive into bomb shelters. In the nine years since the U.S. evacuation, about 9,600 missiles soar from San Diego and plunge menacingly into adjacent communities, spreading terror and death.

The Zapatistas also dig 23 tunnels into nearby neighborhoods. They emerge from them — often disguised as U.S. GIs — and shoot Americans.

Alas, these precautions frequently fail, since the Zapatistas operate among civilians, hide missiles in grade schools, and catapult explosives from deep inside residential neighborhoods. The cynical Zapatistas understand that blending among regular folks lets them conduct their carnage from behind human shields. This deters U.S. operations and, when America does press forward, pro-Zapatista journalists eagerly showcase the unintended and unfortunate human consequences of American self-defense. Although the Zapatistas’ tactics literally are war crimes, the U.S. always gets blamed — as Americans wearily grow to expect.

Still, Americans support their soldiers, even as those abroad denounce the USA, vandalize American property overseas, and burn the Stars and Stripes, for good measure. Regular Americans recognize that the only thing uglier than the mess in San Diego is to stand around and wait for Zapatista rockets to crater LAX’s runways and convert law-abiding southern Californians into body parts.

While this scenario is an imperfect analogy, it approximates what Israel has endured since 2007, thanks to Hamas — the homicidal, rabidly anti-Semitic, militant-Islamic terrorists who misrule Gaza. As its charter clearly states, “Hamas is one of the links in the Chain of Jihad in the confrontation with the Zionist invasion.” It also declares explicitly, “Hamas has been looking forward to implement Allah’s promise, whatever time it might take…The time will not come until Muslims will fight the Jews (and kill them); until the Jews hide behind rocks and trees, which will cry: ‘0 Muslim! There is a Jew hiding behind me. Come on and kill him!’”

To implement its execrable vision, Hamas uses Gaza’s playgrounds, schoolyards, hospitals, and even mosques to launch its deadly, Jew-killing missiles. This month alone, Hamas has lobbed 2,100 such weapons.

An immediate Israeli cease-fire in Gaza would resemble a surgeon extracting just half of a tumor. Thus, Israel must soldier on until the cancer of Hamas is excised and dumped into history’s medical-waste bin.

By Deroy Murdock is a Manhattan-based Fox News contributor and a media fellow with the Hoover Institution on War, Revolution and Peace at Stanford University.

Why is Obama hosting US-Africa Leaders Summit in D.C. during Ebola Outbreak?

Obama, who’s hosting his first ever US-Africa Leaders Summit Aug. 4-6 in Washington is right about there being no threat...