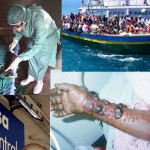 The deadly Ebola virus is “scary,” but “we can stop it,” Centers for Disease Control and Prevention Director Tom Frieden said today.

The day after an American doctor who contracted the virulent disease while doing missionary work in Liberia was flown into the United States for treatment, the CDC chief talked about the task ahead on CBS’ “Face the Nation.”

Kent Brantly was being treated in a special isolation unit at Emory University Hospital in Atlanta after arriving Saturday at Dobbins Air Reserve Base in Georgia. It’s the first known time anyone infected with the virus has been brought into the country.

“We’re hoping he’ll continue to improve,” Frieden–who also was scheduled to appear on Sunday shows on ABC, NBC, and Fox–said on CBS. “But Ebola is such a scary disease because it’s so deadly. I can’t predict the future for individual patients.”

Sheep and Goats: Impure Thoughts on the Gaza War

“This is a generation which knows no fear. It is the generation of the missile, the tunnel and suicide operations.” ...