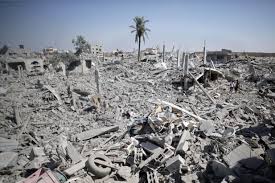 “This is a generation which knows no fear. It is the generation of the missile, the tunnel and suicide operations.”  –Ismail Haniyeh, Hamas PM

Waging a war with moral trilobites is always nasty business, and no nation state knows this truth more fully than Israel in its current conflagration with Hamas. The Gaza regime is a pitiless beast whose primitive instincts compel it to commit acts that are counter to its own long term interests. Indeed, while it is one thing to steel ones heart to the murder of a blood sworn enemy, Hamas is bound and determined to do battle using the scarlet-stained skeletons of their own children as body armor. Tragically, it seems that every soul under the brutal tutelage of Hamas forfeits its innocence and becomes criminally culpable in earning a terrorist state’s impending judgment – to which Gaza is racing blindly to meet headlong.

It is the Palestinian’s proverbial never-ending story: Hamas instigates an asymmetrical conflict as the willing proxy of other nations: in this latest instance it is theocratic Iran. In doing so, it rekindles the Myth of Palestinian Victimhood in the theatre of the Idiot West and again refills its financial coffers from those whose ethical compass has been long shattered. In its hypocrisy, it clumsily kills its own “innocents” by launching rockets as it wails and indignantly shakes its index finger westward to an audience of friendly cameras who are as honest as Bedouin traders. Hamas has proven itself to be of pure Palestinian pedigree: incapable of honor or shame and equal to the hideous task of sacrificing the lives of hundreds of its nimble children to construct its terror tunnels or summarily executing individuals who reject the staged martyrdom that comes from standing in close proximity to a rocket launcher. No action is contemplated without the ruthless calculation of how it will play to the world’s grandstands, all while filtered through the media’s unilaterally distorted lens.

While the usual suspects of the media can be called upon to spread their legs in  unquestioned obedience to Israel’s destruction, the prevailing winds have changed a bit  and the stench of sulphur rising from the rhetoric of Arab apologists has rendered the “poor- mouthing” Hamas government a figure increasingly worthy of derision. This time around, it seems as if the bloom is somewhat off the rose, since cease-fires have been routinely ignored by Hamas and the ugly truth about the origin of Gaza’s casualties is trickling out at an increased rate to help balance the regime’s well-oiled public relations machine. Other than the congenitally deranged, no one of consequence any longer doubts that U.N. schools, hospitals, and mosques are home to military HQs and munitions caches, although Hillary Clinton laughingly attributes this barbarism to the cramped conditions in Gaza.  And moreover, the suffering of the Israelis in terms of their terrorized civilians and IDF casualties have been brought to light like never before to the drowsy Occidental world, thanks to alternative social media.

Nevertheless, one must awaken before perceiving the truth. Jew hating has become a revived art form in Europe and the U.S., but despite the green light of political fashion, those timid intellects that are still sensitive to the charge of anti-Semitism are quick to profess, through the aid of tortured reasoning, that although they might despise Israel, they hold no such quarrel with Jews per se. Indeed, it is through such contorted moral gyrations that the Left’s eyes glaze over so that evil is comfortably accommodated in minds that can compartmentalize conflicting claims of justice and logic.

Being a fundamentally reasonable people, Israel has so far shown itself unwilling to bite the bullet and conduct war in the style of their adversary, who if the tables were turned, would shed no crocodile tears in committing genocide. Although Israel could make short work of this “oozing sore” with its superior firepower by forever assuring that tunnels would not be replaced nor rockets re-fashioned, it has been restrained both by its own morality and by the effeminate sensibilities of naïve spectators who lack skin in the region. Thus, the IDF must resort to “roof-knocking” and airstrikes conducted with surgical precision in order to help separate the sheep from the goats – even if those adorable lambs wield AK-47’s and have been psychologically conditioned and militarily trained to snipe at advancing soldiers. In the final reckoning, death is no respecter of persons, and its claims are indifferent to whether they are administered through the hands of hardened insurgents or blushing young maidens sporting a bomb vest.

But it all comes down to this: When prosecuting war aims, the ultimate goal is to neutralize an enemy’s resources and collective will to continue fighting – not just temporarily, but permanently. It is madness to treat Hamas’ aggression as just another “mowing the lawn” exercise.  Anything less is kicking the can down the road and makes a mockery of holy sacrifices and squandered treasure that have been expended in killing aggressors and shattering their swords.  Without experiencing that terrible moral education of suffering that comes as retribution for fomenting wars, a people are trapped within a never-ending loop of futility: where no lessons are learned or malignant regimes replaced. With instances of national evil: where the population is complicit in electing a thoroughly wicked leadership, the people must be held accountable and made to swallow the dregs of their defeat whole. One can only imagine what might have transpired if Nazi Germany were dealt with as Hamas has been.  In truth, the goals of Hitler and Hamas are identical in respect to the Jew, and the only distinction separating them is one of resources, not will.  Moreover, it was thoroughly necessary to bring the stark implications of total war home to the average German: whose young boys and girls fueled the war effort, while they themselves produced the material necessities to continue German aggression.  In the end, that unholy regime was destroyed and discredited in the minds of its population, and Germany was then free to rise from the ashes of its error.

Despite the current obtuseness infecting a planet that increasingly cannot divide evil from good, Israel is reaching the natural limits of its patience with Hamas. The Jewish state, having handed the Palestinians a ring of gold in good faith, has for its trouble been rewarded with missiles from a nest of adders. Incredibly, no nation on earth has been more forgiving, having been confronted and fallen upon time and again with bile and bellicosity. It is imperative to squarely face the fact that within the regimes headed by Hamas and Hezbollah, the distinction between innocence and guilt — sheep and goats — has grown agonizingly thin.  Unless a wave of introspection, delivered through the vehicle of white hot pain, is experienced and the consequences of propping up a wicked regime are internalized by the Palestinian street, many more human lives will be destroyed : either by the living death that comes from a concentrated diet of hate, or from the Israeli juggernaut who has exhausted its tolerance. Speaking to the latter, the frightening discovery of Hamas’ Rosh Hashana Tunnel Plot to massacre and kidnap Israeli civilians from towns situated adjacent to Gaza has only steeled Jewish resolve and unified her as a society, even the perpetually recalcitrant Israeli Left.

That vast system of swamps that poison the Muslim world will one day need to be sterilized and drained, and Gaza has made itself conspicuous through its reckless admixture of audacity and guile. Within any jungle where self-preservation is paramount, any distinction between sheep and goats is wasted on the lion and one baits him to his own singular peril. In that political state of nature, where the decision to either kill or be killed is the only option, do not be surprised when the craven stratagem of delivering indiscriminate death from behind a phalanx of schoolgirls raises the temperature of warfare to the melting point, and the only truly merciful response is the utter abandonment of mercy.

Glenn Farman writes from Highland, Ca.  He welcomes your correspondence at [email protected] and can be followed at www.stubbornthings.org  and on Twitter.

In Case You Missed It:  AZ forensic audit results show SYSTEMIC fraud, faked votes, more than 5X the margin of "victory" from just one county out of the entire state ... prepare for CRISIS THEATER distractions
Posted in Freedoms.

Time to Investigate the UN for War Crimes

The United Nations, predictably, has condemned Israel for defending itself, suggesting that Israel may have committed war crimes in fighting...