Below is some video that seems to corroborate reports of Hamas beating civilains. It’s bad enough that Hamas launches rockets from civilian locations like schools, hospitals and neighborhoods in the interest of garnering international sympathy when civilians are killed. 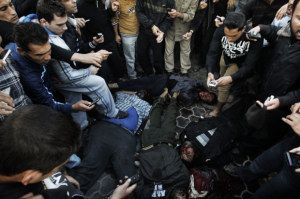 What happens when civilians attempt to heed the IDF warnings to evacuate so the locations can be bombed without civilian deaths, is far worse. These civilians are beaten by Hamas to force them back into the buildings they know have been targeted for destruction.

Here is video that purports to show Hamas fighters beating and whipping their own civilians in order to force them back into those buildings. This may not have happened in this conflict but may have happened in 2009 or 2006 but it does prove the charges that Hamas uses its own people as cannon fodder for Western media consumption to stir up the anti Jews in Europe and leftists in teh USA.

Media companies that facilitate these despicable actions by failing to report on them have as much blood on their hands as the terrorists who force civilians to their deaths.

Because the media is allowing the heinous tactic to work.

In Case You Missed It:  9-11-2001 NEVER FORGET
Posted in Terrorism and tagged Gaza, Hamas, Terrorism.

A Cambridge University disease expert warns that terrorists are planning a dirty bomb containing the Ebola virus, even planning to send Muslim...