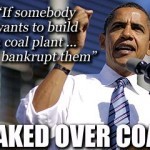 Marine veteran Shawn Adkins says he’s ready to fight back against Obama’s so-called “war on coal” as it tears through West Virginia. Federal regulations are forcing a coal company to lay off an expected 1,100 workers in the coal-heavy state, stripping away what Adkins calls the “blood and oxygen” of families in the region.

General Electric in the Dark About Ex-Im

The campaign for cronyism grabbed headlines on Monday, when the chairman of General Electric claimed that taxpayer subsidies are “crucial”...