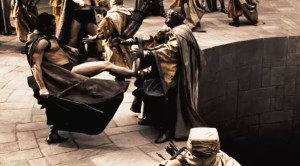 By the first decade of the fifth century B.C., Darius the Persian had grown exceedingly proud, and the insolence of that power lifted his eyes to the West for the acquisition of greater empire. Thus, he sent heralds throughout Greece asking for “earth and water” – tokens of submission to gratify his hunger for the excesses that come with inordinate desire.  It is said that the Spartan King Kleomenes (not Leonidas as per the movie “300”) pushed those ambassadors into a well and told them to “get your earth and water there.” Although lacking in grace, one cannot disagree that the Spartans — known for their laconic manner, possessed a certain style. And if war was eventually to be had, it would be faced on the fields of decision — where the early vestiges of the West accounted freedom from the eastern yoke dear enough to risk all, even in the face of an overwhelming swarm of enemies. Sometimes “killing the messenger” sends the proper signal that the conservation of all that one loves is not an insignificant thing to be trifled with — and that even ambassadors should beware of the tidings they bring.

Much has changed in 2500 years, but the successful diplomatic mediation of wars between belligerents has always been guided by that steady blend of even-handedness and political prudence rooted in an enlightened understanding of human justice. Implicit in this judgment rests the notion that a people have a natural right to retain what is theirs and what they duly deserve. Moreover, they are obligated to fight tooth and claw in order to keep their freedoms and dispense with mortal enemies who would fall upon them while engaged in their pursuit of the good life. Conversely, when a just diplomacy is consistent with an expansive knowledge of truth, enlightened law and practical wisdom, the shrewd judgments of wise men carry great force in pacifying the villains of the earth. Some regimes have telegraphed to the world, by virtue of their actions and arguments, that they are worthy only of annihilation and that entering into protracted negotiations with them is tantamount to plying a shark with Kantian moral imperatives. Indeed, callow and craven appeasement in diplomacy does little more than whet the voracious appetite of tyrants for more – always more. Ultimately, diplomatic probity at the true statesman’s level must mean more than merely finding the mean between two opposing points and reckoning that middle frontier as justice.

In its perception of the current war between Israel and Gaza, much of modern liberal reasoning resides in a state of moral disorientation and can no longer be counted on to correctly define the parameters of good and evil. This being so, such minds are often held hostage to specious rationalizations grounded in moral equivalence, or the effeminate fallacy that the interests of the stronger should be subservient to that of the weaker party.  Having jettisoned the prerequisites of justice, liberals rely on the entreaties of the media’s selective eye and this spectacle overwhelms their reservoir of emotions that soon co-opts their rationality.  In the case of Gaza, it is believed that no nation would suffer in vain and that the adversary who is superior in strength must be acting in bad faith. Therefore, it is weakly reasoned, as disputes are in the schoolyard, that both side’s competing claims to right are co-equal in value, and that since all sane men are motivated by the common ends of peace, no  one party’s claims can be held as exclusively good. That this liberal perception of good and evil is often times profoundly mistaken is itself proof that we occupy a convoluted age of moral dwarves: evidenced by women that send marriage proposals to serial killers or bleeding hearts funneling money to terrorist underdogs intent upon exterminating all who do not accord their political will with the very mind of God. The Will to Suicide is the default state for intellects such as these.

When a sworn adversary has the obliteration of your country enshrined into its very charter, how does one prudently meet him halfway? If your answer is:  “you do not,” then you are exponentially wiser than the U.S. State Dept. Even so, despite the concerted efforts of American foreign policy, under the lead of John Kerrey, to extract Gaza’s chestnuts out of the fire so that she may live to massacre Jews on another day, Israel has chosen to shatter Hamas using whatever means are available in its formidable tool box.  Having never “missed an opportunity to miss an opportunity,” the Palestinians of Gaza have bluffed big on a poker hand holding deuces; and in doing so, have brought the wrath of Gideon down upon them. And no shrill threats from the toothless Barack Obama or Western Europe’s coterie of dhimmi catamites will serve to any longer stay the Jewish hand from preserving its own existence. That Rubicon has been forever crossed.

When an American regime, using its considerable diplomatic  arts in the crafting of a cease-fire, attempts to thwart the will of those “moderate” Arab states that would  chasten Hamas for its inhuman belligerence, then you know that Washington has abandoned its courage and made its bed with the marauders of Western Civilization.  Having read its auspices in a broken teacup — where the empty promises of liberal accolades have leaked out onto effeminate blood drenched fingers, the Obama administration has revealed its moral nakedness for all to witness.  Indeed, even while knowing how much destruction Hamas had unleashed, U.S. diplomacy was determined to reward the aggressor with treasure, open borders, and an end to Gaza’s embargo — thereby opening the floodgates for the importation of materials (and weaponry) to rebuild its labyrinth of tunnels that were soundly dispatched over a two week period by the IDF. Never mind that Egypt, Saudi Arabia and Jordan were cheering Hamas’ comeuppance in low key fashion. The Obama Administration will go ahead with its goal of transforming the face of America, the Middle East, and the world – even if the price of such a metamorphosis equates to a wasteland unrecognizable to the average American.  Such a reinvention of society and human nature requires not only the simple breaking of eggs, but the breaking of peoples who refuse to submit to the fickle compulsions of historical necessity. Those elites on the “right side” of history need never say that they are sorry.

I cannot point to the time when the awareness of this phenomenon washed over me, but I am ashamed at what my government — with its rich history and promise – has become in the hierarchy of nations.  If American Middle Eastern policy is abandoning moral courage for the honor of being raped over a barrel of crude oil, then count me as an insurgent. If we as a people go so far as to betray our Israeli friends who man the West’s barricades on the front lines of World War III, then I choose their interests over ours.  And since we cannot gin up the courage to shake this country to its senses and show them what has been lost during the crooked course of a wicked regime, I’ll place my faith in Israel – and longingly wait for King Bibi to Sparta kick that faithless ketchup stained bastard down the steps of the Knesset.

by Daniel PipesIsrael HayomAugust 5, 2014 What role does religion play in American attitudes towards Israel? An analysis by Frank...