Throughout the Ukraine crisis, the U.S. State Department and mainstream media have downplayed the role of neo-Nazis in the U.S.-backed Kiev regime, an inconvenient truth that is surfacing again as right-wing storm troopers fly neo-Nazi banners as they attack in the east, Robert Parry reports. 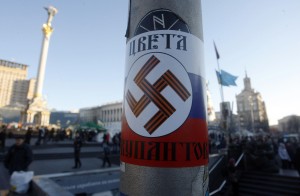 The New York Times reported almost in passing on Sunday that the Ukrainian government’s offensive against ethnic Russian rebels in the east has unleashed far-right paramilitary militias that have even raised a neo-Nazi banner over the conquered town of Marinka, just west of the rebel stronghold of Donetsk.

That might seem like a big story – a U.S.-backed military operation, which has inflicted thousands of mostly civilian casualties, is being spearheaded by neo-Nazis. But the consistent pattern of the mainstream U.S. news media has been – since the start of the Ukraine crisis – to white-out the role of Ukraine’s brown-shirts.

Only occasionally is the word “neo-Nazi” mentioned and usually in the context of dismissing this inconvenient truth as “Russian propaganda.” Yet the reality has been that neo-Nazis played a key role in the violent overthrow of elected President Viktor Yanukovych last February as well as in the subsequent coup regime holding power in Kiev and now in the eastern offensive.

On Sunday, a Times article by Andrew E. Kramer mentioned the emerging neo-Nazi paramilitary role in the final three paragraphs:

“The fighting for Donetsk has taken on a lethal pattern: The regular army bombards separatist positions from afar, followed by chaotic, violent assaults by some of the half-dozen or so paramilitary groups surrounding Donetsk who are willing to plunge into urban combat.

“Officials in Kiev say the militias and the army coordinate their actions, but the militias, which count about 7,000 fighters, are angry and, at times, uncontrollable. One known as Azov, which took over the village of Marinka, flies a neo-Nazi symbol resembling a Swastika as its flag.

“In pressing their advance, the fighters took their orders from a local army commander, rather than from Kiev. In the video of the attack, no restraint was evident. Gesturing toward a suspected pro-Russian position, one soldier screamed, ‘The bastards are right there!’ Then he opened fire.”

In other words, the neo-Nazi militias that surged to the front of anti-Yanukovych protests last February have now been organized as shock troops dispatched to kill ethnic Russians in the east – and they are operating so openly that they hoist a Swastika-like neo-Nazi flag over one conquered village with a population of about 10,000.

Burying this information at the end of a long article is also typical of how the Times and other U.S. mainstream news outlets have dealt with the neo-Nazi problem in the past. When the reality gets mentioned, it usually requires a reader knowing much about Ukraine’s history and reading between the lines of a U.S. news account.

For instance, last April 6, the New York Times published a human-interest profile of a Ukrainian nationalist named Yuri Marchuk who was wounded in the uprising against Yanukovych in February. If you read deep into the story, you learn that Marchuk was a leader of the right-wing Svoboda from Lviv, which – if you did your own research – you would discover is a neo-Nazi stronghold where Ukrainian nationalists hold torch-light parades in honor of World War II Nazi collaborator Stepan Bandera.

Without providing that context, the Times does mention that Lviv militants plundered a government arsenal and dispatched 600 militants a day to Kiev’s Maidan square to do battle with the police. Marchuk also described how these well-organized militants, consisting of paramilitary brigades of 100 fighters each, launched the fateful attack against the police on Feb. 20, the battle where Marchuk was wounded and where the death toll suddenly spiked into scores of protesters and about a dozen police.

Marchuk later said he visited his comrades at the occupied City Hall. What the Times doesn’t mention is that City Hall was festooned with Nazi banners and even a Confederate battle flag as a tribute to white supremacy.

The Times touched on the inconvenient neo-Nazi truth again on April 12 in an article about the mysterious death of neo-Nazi leader Oleksandr Muzychko, who was killed during a shootout with police on March 24. The article quoted a local Right Sektor leader, Roman Koval, explaining the crucial role of his organization in carrying out the anti-Yanukovych coup.

“Ukraine’s February revolution, said Mr. Koval, would never have happened without Right Sector and other militant groups,” the Times wrote.

The brutality of these neo-Nazis surfaced again on May 2 when right-wing toughs in Odessa attacked an encampment of ethnic Russian protesters driving them into a trade union building which was then set on fire with Molotov cocktails. As the building was engulfed in flames, some people who tried to flee were chased and beaten, while those trapped inside heard the Ukrainian nationalists liken them to black-and-red-striped potato beetles called Colorados, because those colors are used in pro-Russian ribbons.

As the fire worsened, those dying inside were serenaded with the taunting singing of the Ukrainian national anthem. The building also was spray-painted with Swastika-like symbols and graffiti reading “Galician SS,” a reference to the Ukrainian nationalist army that fought alongside the German Nazi SS in World War II, killing Russians on the eastern front.

The death by fire of dozens of people in Odessa recalled a World War II incident in 1944 when elements of a Galician SS police regiment took part in the massacre of the Polish village of Huta Pieniacka, which had been a refuge for Jews and was protected by Russian and Polish partisans. Attacked by a mixed force of Ukrainian police and German soldiers on Feb. 28, 1944, hundreds of townspeople were massacred, including many locked in barns that were set ablaze.

The legacy of World War II – especially the bitter fight between Ukrainian nationalists from the west and ethnic Russians from the east seven decades ago – is never far from the surface in Ukrainian politics. One of the heroes celebrated during the Maidan protests in Kiev was Nazi collaborator Stepan Bandera, whose name was honored in many banners including one on a podium where Sen. John McCain voiced support for the uprising to oust Yanukovych, whose political base was among ethnic Russians in eastern Ukraine.

During World War II, Bandera headed the Organization of Ukrainian Nationalists-B, a radical paramilitary movement that sought to transform Ukraine into a racially pure state. OUN-B took part in the expulsion and extermination of thousands of Jews and Poles.

Though most of the Maidan protesters in 2013-14 appeared motivated by anger over political corruption and by a desire to join the European Union, neo-Nazis made up a significant number and surged to the front during the seizure of government buildings and the climatic clashes with police.

In the days after the Feb. 22 coup, as the neo-Nazi militias effectively controlled the government, European and U.S. diplomats scrambled to help the shaken parliament put together the semblance of a respectable regime, although at least four ministries, including national security, were awarded to the right-wing extremists in recognition of their crucial role in ousting Yanukovych.

As extraordinary as it was for a modern European state to hand ministries over to neo-Nazis, virtually the entire U.S. news media cooperated in playing down the neo-Nazi role. Stories in the U.S. media delicately step around this neo-Nazi reality by keeping out relevant context, such as the background of coup regime’s national security chief Andriy Parubiy, who founded the Social-National Party of Ukraine in 1991, blending radical Ukrainian nationalism with neo-Nazi symbols. Parubiy was commandant of the Maidan’s “self-defense forces.”

Last April, as the Kiev regime launched its “anti-terrorist operation” against the ethnic Russians in the east, Parubiy announced that his right-wing paramilitary forces, incorporated as National Guard units, would lead the way. On April 15, Parubiy went on Twitter to declare, “Reserve unit of National Guard formed #Maidan Self-defense volunteers was sent to the front line this morning.” (Parubiy resigned from his post this past week for unexplained reasons.)

Now, however, as the Ukrainian military tightens its noose around the remaining rebel strongholds, battering them with artillery fire and aerial bombardments, thousands of neo-Nazi militia members are again pressing to the front as fiercely motivated fighters determined to kill as many ethnic Russians as they can. It is a remarkable story but one that the mainstream U.S. news media would prefer not to notice.

Investigative reporter Robert Parry broke many of the Iran-Contra stories for The Associated Press and Newsweek in the 1980s. You can buy his new book, America’s Stolen Narrative, either in print here or as an e-book (from Amazon andbarnesandnoble.com).

In Case You Missed It:  Goya Foods CEO says “we are on the precipice of a global food crisis”
Posted in Freedoms and tagged Nazism, Ukraine.