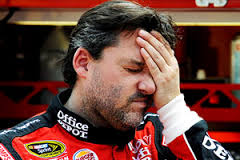 Those of us who smugly regard western culture to be vastly superior to the subhuman carnage routinely practiced by Islam devotees appeared to be vindicated by the sickening photo of a 7-year-old Muslim boy proudly displaying the bloodied head of a Syrian soldier killed by Islamic State heathen in July.

Barbaric lack of regard for human life, we exclaimed in united horror. Another perfect example of the savagery of Islam, the misnamed “Religion of Peace.”

However, a fatality on a race track in Canandaigua, N.Y. last week end suggests that Americans may, in some instances, also lack appropriate sensitivity when it comes to terminating a human life

Perhaps winning a car race and preserving one’s macho image are more important than ending an insignificant life, at least in some situations?

At issue is the tragic death of 20-year-old Kevin Daly Jr. who idiotically left his race car and walked among speeding cars during a race.

Unfortunately for Daly, his decision to walk in the dark among cars driven at blazing speeds on a race track cost the young man his life when Tony Stewart smashed into Daly, thereby killing the 20-year old.

The NASCAR spectacle was captured on video and immediately went viral as America watched in horror and disbelief.

Tony Stewart made what some fans considered a magnanimous gesture by announcing that, out of respect for the dead 20-year-old, he would not take part in a race scheduled for this past Monday evening.

It does not appear that Tony Stewart was detained by authorities. His greatest loss, to date, appears to have been missing a scheduled race!

Of course, the bloody mess was investigated as reported at the reference.

Summing up the investigation on Monday, Ontario County Sheriff Philip Povero said there currently were no criminal charges pending.

“At this time, there are no facts that exist that support any criminal behavior or conduct or any probable cause of a criminal act in this investigation,” he said.

“This is an open investigation. What I have just said is not indicative that the investigation is over or conclusions have been made, but that we are continuing to gather all information,” he continued.

He also said an autopsy conducted Monday by the Ontario County coroner found Ward’s cause of death to be massive blunt trauma.

So, Tony Stewart caused “massive blunt trauma” to the personage of Kevin Ward Jr. who died as a result, and Stewart is still wrestling with whether or not to race this weekend?

And “At this time, there are no facts that exist that support any criminal behavior or conduct or any probable cause of a criminal act in this investigation,” according to Sheriff Povero?

What about “involuntary manslaughter,” Sheriff? Or negligence?

Surely a man cannot run down another man, accidentally or not, and kill said man with impunity? Not here in sophisticated, civilized America with our rich Christian heritage and family values?

At a minimum, Tony Stewart should be restricted from racing until the investigation into the death of Kevin Daly Jr. is completed and the lack of “criminal behavior or conduct”
is confirmed by law authorities!

Surely that cannot be asking too much! In America!

In Case You Missed It:  Scores of U.S. troops still aren't vaccinated for COVID-19; are we going to have a viable military left by the end of winter?
Posted in Freedoms.

The House Benghazi Select Committee started its investigative work this month. No fireworks yet, and that bothers the critics of...