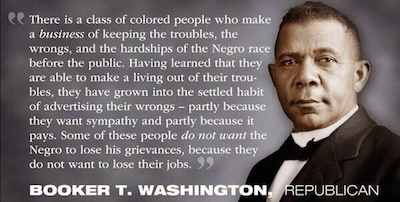 By Alan Caruba:  Well, we now have another black riot to put in the books. This one, like the others, involve the death of a black American by a white police officer, but buried in the stories about the Ferguson, Missouri riot is the fact that there was an altercation between Michael Brown and the officer who shot him after having sustained an injury.

The response of some members of the black community in Ferguson was to vandalize and loot stores on Sunday night victimizing the owners of those stores, some of whom avoided it by standing fully armed in front of their place of business. Since then the rioting has continued through Wednesday, inflamed by the predictable presence of Al Sharpton who is famed for getting on the first plane available to get to the scene of riots and similar incidents.

Keeping blacks convinced of their victimization has a long history and was even commented upon by Booker T. Washington (April 5, 1856 – November 14, 1915) who, as far back as 1895, called for avoiding confrontations over segregation by putting more reliance on long-term educational and economic advancement in the black community. Dr. Martin Luther King, Jr. expanded on this theme by advocating non-violent protest during the 1950s that led to the passage of the Civil Rights Act in 1964.

There is no question that blacks in America have had a very sorry history of slavery, segregation, and lynchings, but that was then and this is now. Fifty years past the Civil Rights Act, however, there should be no riots the likes of Ferguson.

Police officers who put their lives on the line every day to protect us have a right to self defense.

Recently, a fellow blogger cited a few of the riots since the days of civil rights protests. In 1989 there was the Overton riot in Miami, Florida, in reaction to the shooting of a black motorcyclist by a Hispanic police officer in that predominantly black community. In 1992, there were the Los Angeles riots in reaction to the acquittal of LAPD officers involved in the videotaped beating of Rodney King.

All of these riots have in common the shooting of a black man by a white or Hispanic officer, presumably in fear for his life, with the exception of the response to the Rodney King beating following a high speed car chase.

“Very few leading black voices in the pulpit or on the political stage are focused on having black people take personal responsibility for the exorbitant amount of crime committed by black people against other black people. Today’s black leaders sing like a choir when they raise their voices against police brutality and the increasing number of black people in jail…but any mention of black American’s responsibility for committing the crimes, big and small, that lead so many to prison is barely mumbled if mentioned at all.”

That puts the latest riots in Ferguson in perspective and is an indictment of men like Al Sharpton, Jesse Jackson, and others who have profited from keeping blacks in a mental state of victimization when the real problem of too many in the black community is rooted in a culture of violence and criminality. The statistics do not lie.

Whites who witness such riots since the passage of the Civil Rights Act in 1964 and Voting Rights Act in 1965 can be forgiven for concluding that too many in America’s black community have not taken advantage of the rights those laws represent. The good news, generally ignored, is the way many black Americans have focused on the benefits of education and have moved into the middle and upper classes of our population.

These riots do nothing to advance the black community and no doubt are an embarrassment that, regrettably, have occurred too often in the years since America took dramatic steps to reverse the discrimination of the past.

In Case You Missed It:  BREAKING: WHAT ARE THEY HIDING? Fences At Maricopa County Elections Department Are Reportedly Being Covered Up So People Cannot See! – STILL COUNTING 2 Days After Election
Posted in Tyranny and tagged Crime, Obamanomics, Protests, Riots.

20 Reasons NAFTA Is Destroying The Economy

Back in the early 1990s, the North American Free Trade Agreement was one of the hottest political issues in the...