A sign carried by a protester in Ferguson, Missouri, declaring the presence of the Islamic State, or ISIS, is an act of intimidation, warning Americans they should fear the Middle Eastern Islamic jihadist group even in their own homes, according to an expert. 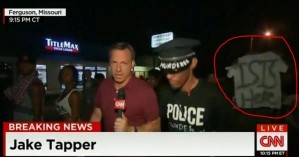 “The objective is to ‘strike terror into the hearts of the enemies of Allah’ (Quran 8:60) and to emphasize the desire of Islamic State jihadis to strike within the U.S.,” he said.

“The fact that they have supporters here in the U.S. who can hold the banner in Missouri and the sign at the White House shows that that is a very real possibility,” he warned.

The Islamic State is the terror army that has taken over large areas across Iraq, killing and scattering Christians and other non-Muslims. The atrocities have included the slaughter of men, women and children, forced sex slavery and the destruction of religious sites, including what is believed to be the tomb of the prophet Jonah.

Now, in Ferguson, where mobs have been rioting for more than a week over the shooting death of a black teen by a police officer, Islamic State is claiming a presence.

Video of CNN’s Jake Tapper delivering a report in Ferguson shows someone carrying the Islamic State sign down the street, keeping pace with Tapper.

The Daily Mail in the United Kingdom reported other ways ISIS is threatening Americans in Ferguson.

Among the social media messages monitored by the paper was one from Amarka Al-Ahlam, who said, “I believe that all #IS members in America should travel to Ferguson and prepare to establish a revolutionary Islamic state.”

Amreeki Witness said: “It’s time to strike fear into the hearts of the oppressors. #FergusonUnderIS.”

The Mail said one ISIS supporter, Mujahid Miski, said he was based in Africa. He reportedly was leading the campaign of fear, writing: “So how is democracy treating you guys? #FergunsonUnderIS.”

The Mail reported, “In one message Amreeki Witness mocks the curfew police have imposed in Ferguson to bring an end to the disorder, saying: ‘We IS guys hate you for your freedom, eh? Just like that freedom uplifting curfew in #Ferguson? Wake up, or they’ll never let you outside.’”

Another social media jihadist wrote: “Any and all #IS members in the kufar lands – I urge you to travel to #Ferguson and form brigades there, to take the unrestful land Inshallah.”

The violence in Ferguson erupted after a police officer shot and killed 18-year-old Michael Brown Aug. 9. Autopsy reports suggested the suspect in a strong-arm robbery of a store just a few minutes earlier was rushing at the officer when he was shot.

Critics of police claimed Brown had raised his arms and was surrendering when he was shot.

Police in the St. Louis suburb have used tear gas, smoke bombs, Long Range Acoustic Device weapons, curfews and dispersal orders to try to contain the unrest. There were about 30 people arrested overnight Monday and a few injuries. 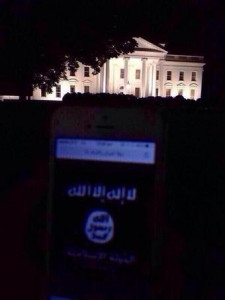 Under the photo on Twitter, the following message was shared…

We are in your state

We are in your cities

We are in your streets

You are our goals anywhere

So could they actually be here?

Well, even the most hardcore skeptic has to admit that anything is possible considering how porous our borders are.  In fact, earlier this month a filmmaker dressed up as Osama bin Laden and crossed the RioGrande River.

If ISIS jihadists wanted to get into this country, border security would not be an issue.  If the Obama administration had any concern for our national security whatsoever, it would secure the border, but of course that will never happen.

And without a doubt they know that men from the Middle East are constantly crossing our southern border.  An abandoned Islamic prayer rug was found near the border in Arizona just the other day, and according to one expert U.S. Border Patrol agents are reporting that Mexican gang members are getting up to $50,000 a head to bring “Middle Easterners” into the United States…

By Arthur Weinreb:  Canada and the United States are the only two Western countries that automatically grant citizenship to babies born...