Les Vegas Metro police have confirmed Muslim leaders inside al-Qaida  are encouraging Muslim  jihadists to target Las Vegas for terror attack. That information comes from a recent publication which names the city as a top spot to strike for Muslims. 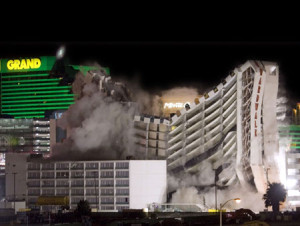 It’s in a publication titled Palestine where you can see Las Vegas listed as a top spot for a Muslim terror attack. The city is listed in a section about building and using car bombs. Splinter said it’s not uncommon for publications like this to suggest the names of big cities to target.

“It does not, however, interpret there is any planning or operational phases that have been identified as of yet,” Splinter said.

Muslims have made specific targets like nightclubs and casinos to rack up mass casualties. Splinter said there is no evidence of a specific plan in place, but she and her team have their eyes open.

“We have thousands of trained personnel in our community and staff on the Strip that remain vigilant,” Splinter said.

“This is a very detailed and precise manual, how to make a bomb,” said Doron Benbenisty, the owner of Counter Terrorism Training School.

Benbenisty said Las Vegas has always been a target for a potential terror attack. He said it’s the city’s vulnerability, having casinos and an international airport, that makes us a target.

“The population is very dense. The Strip is the lifeline of the city, they know. What’s the purpose of terrorists, besides killing people? It’s disrupting our way of life,” Benbenisty said.

Benbenisty said after learning of this information people should not be afraid, but aware.

“Preparing, being proactive, that’s the key role that needs to be played to prevent that,” Benbenisty said.

In Case You Missed It:  “I Can See Why They’re Trying To Silence You” – Tucker Carlson On Trump-Endorsed Kari Lake After She Gave THE BEST Response To Propagandist’s 2020 Election Question
Posted in Terrorism and tagged al-Qaida, Islam, Jihad, Nevada, Terrorism, United Socialist States of America.

Why Some Pro-Lifers Go Cold on ALS Ice Bucket Challenge

Cathy Pell, a stay-at-home mom from Manassas, Va., decided to take down her “Ice Bucket Challenge” videos from Facebook after...