By Judi McLeod :  The brutal Islamic State (IS) terrorists,  who wanted Aafia Siddiqui aka ‘Lady al-Qaeda’ swapped for decapitated photojournalist James Foley, are merely the latest in a long line of fanatics seeking the release of a woman caught redhanded in Afghanistan with detailed plans on how to kill the masses by spreading Ebola, and with dirty bombs and chemical weapons that would somehow spare children while killing off adults. 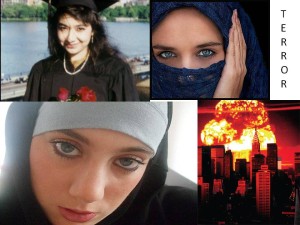 She also had two pounds of highly toxic sodium cyanide hidden in her bag and documents detailing potential New York targets for attack,  including Wall Street, the Empire State Building, the Brooklyn Bridge, the Statue of Liberty and the subway system.

In other words, The release of ‘Al Qaeda Lady’  Aafia Siddiqui to spare the life of photojournalist James Foley was not originally the idea of the Islamic State’s notorious ‘Jihadi John’, it was part of a long time, ongoing far-left campaign in America first.

Thanks to masterful research whiz Cliff Kincaid, we know that hardline, far left American activists who have been working for years to achieve Siddiqui’s release, started the chain of action.

“In the U.S., the movement by American Muslims to free captured terrorist Siddiqui includes Ramsey Clark, the Workers World Party (WWP) and the Party for Socialism and Liberation. Some members of the former left to form the latter. They operate front organizations such as ANSWER (Act Now to Stop War and End Racism) and the International Action Center. The Workers World Party had been investigated by the House Internal Security Committee for its support of the North Korean regime and Arab terrorist groups.” (USA Survival—PDF)

Former attorney general Ramsey Clark, once the chief law enforcement officer of the USA, compared Jesus Christ to a terrorist during a media event for a new anti-war group: “The Christian Church overwhelmingly—there are exceptions—who choose to call Mohammed a terrorist.  They could call Jesus a terrorist too.  I mean, he was pretty tough on money lenders a time or two.”  (CNSNews, July 7, 2008) 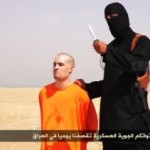 The brutal beheading of James Foley by an Islamic State executioner with a British accent has brought focus to ‘homegrown’ jihadists in Britain and the United States.

According to yesterday’s Daily Mail,” three British men waging jihad in the Middle East alongside the Islamic State (IS) have emerged as potential identities for the masked extremist who killed James Foley in a brutal propaganda video.  Rapper Abdel-Majed Abdel Bary, 23, (pictured centre and top left with a severed head), is among those who have been suggested a potential identities for the killer known only as ‘John’. Abu Abdullah al-Britani (bottom left), who is believed to be behind social media accounts attempting to recruit teenagers, and computer hacker Abu Hussain al-Britani, 20, have also been mentioned. Security sources say that, thanks to information posted online, they are getting closer to a definitive identity.”

Siddiqui, whose picture graces an FBI Most Waned poster and is currently serving 86 years in a Texas jail, was educated in America.

“Siddiqui went to the US on a student visa in 1990 for undergraduate and graduate education. She eventually settled in Massachusetts and earned a PhD in neuroscience from Brandeis University in 2001. A Muslim who had engaged in Islamic charity work, she returned to Pakistan in 2002 before disappearing with her three young children in March 2003, shortly after the arrest in Pakistan of her second husband’s uncle, Khalid Sheikh Mohammed, the alleged chief planner of the September 11 attacks. Khalid Mohammed reportedly mentioned Siddiqui’s name while he was being interrogated and, shortly thereafter, she was added to the FBI Seeking Information—War on Terrorism list.(Wikipedia)

“In May 2004, the FBI named Siddiqui as one of its seven Most Wanted Terrorists. Her whereabouts were reported to have been unknown for more than five years until she was arrested in July 2008 in Afghanistan. Upon her arrest, the Afghan police said she was carrying in her purse handwritten notes and a computer thumb drive containing recipes for conventional bombs and weapons of mass destruction, instructions on how to make machines to shoot down US drones, descriptions of New York City landmarks with references to a mass casualty attack, and two pounds of sodium cyanide in a glass jar.

Siddiqui was shot and severely wounded at the police compound the following day. Her American interrogators said she grabbed a rifle from behind a curtain and began shooting at them. Siddiqui’s own version was that she simply stood up to see who was on the other side of the curtain and startled the soldiers, one of whom then shot her. She received medical attention for her wounds at Bagram Air Base and was flown to the US to be charged in a New York City federal court with attempted murder, and armed assault on US officers and employees. She denied the charges. After receiving psychological evaluations and therapy, the judge declared her mentally fit to stand trial. Siddiqui interrupted the trial proceedings with vocal outbursts and was ejected from the courtroom several times.The jury convicted her on all charges in February 2010.

The prosecution argued for a “terrorism enhancement” that would require a life term; Siddiqui’s lawyers requested a 12-year sentence, arguing that she suffers from mental illness. The charges against her stemmed solely from the shooting, and Siddiqui was not charged with any terrorism-related offences.

Amnesty International monitored the trial for fairness. Four British Parliamentarians (Lord Ahmed, Lord Sheikh, Lord Patel, and MP Muhammad Sarwar) called the trial a grave miscarriage of justice that violated the Sixth Amendment to the United States Constitution as well as the United States’ obligations as a member of the United Nations, demanding Siddiqui’s release. In a letter to Barack Obama, they stated that there was a lack of scientific and forensic evidence tying Siddiqui to the weapon she allegedly fired. Many of Siddiqui’s supporters, including some international human rights organisations, claimed that Siddiqui was not an extremist and that she and her young children were illegally detained, interrogated, and tortured by Pakistani intelligence, US authorities, or both, during her five-year disappearance. The US and Pakistan governments have denied all such claims.

“Siddiqui married 9/11 planner Ammar al-Baluchi and carried on research on biological weapons at his request. She was convicted of attempted murder and received a 86-year prison sentence for shooting at FBI agents and soldiers after her arrest in Afghanistan. Her attorney, Linda Moreno, represented terrorist financier Sami al-Arian and the chairman of the board of the Holy Land Foundation in the Hamas terror finance case. “She spoke at the 2010 16th annual fundraising banquet of the San Francisco Bay Area chapter of Hamas-linked CAIR. (USA Survival)

The release of ‘Al Qaeda Lady Aafia Siddiqui to spare the life of photojournalist James Foley did not originate with the Islamic State’s cowardly, black-masked ‘Jihadi John’, it was part of a far-left campaign in America first.

It’s Freedom OF Religion; Not Freedom FROM Religion

By Alan Caruba :  The Declaration of Independence and the U.S. Constitution do not abandon religion, they embrace it. They do not,...