Yet another American company is aiming to move its headquarters out of the country.

International fast food behemoth Burger King Worldwide Inc. confirmed Tuesday that it will pay about $11 billion to buy Canadian chain Tim Hortons Inc., which sells coffee, donuts, and other breakfast food fare. The deal would merge America’s second-largest burger chain, which is valued at nearly $10 billion, with the Canadian equivalent to Dunkin’ Donuts, which is valued at more than $8 billion. It would also move the new company’s headquarters to Canada, where corporate taxes are significantly lower.

The newly merged company would become the world’s third-biggest “quick service restaurant company,” with more than 18,000 restaurants in 100 countries, said Burger King and Hortons in a statement Monday. The deal would create a business capable of rivaling Yum Brands, which owns Taco Bell and Pizza Hut, and is valued at more than $30 billion. But while Yum Brands operates from Louisville, KY, the new Burger King and Tim Hortons parent company would likely station itself in the Ontario province of Canada.

On the surface, the reason for a headquarter shift across the country’s northern border is simple: lower corporate taxes.

As we have have noted before, when a company reincorporates abroad, as the practice is known, what it’s really doing is shifting its corporate citizenship; and when a company shifts its corporate citizenship, what it’s really doing is trying to pay less in taxes. The effective corporate tax rate in the U.S., which combines national, state, and city-level tax rates, is nearly 40 percent—the highest across all 34 Organization for Economic Cooperation and Development (OECD) member countries. Canada’s, by comparison, is just over 26 percent. 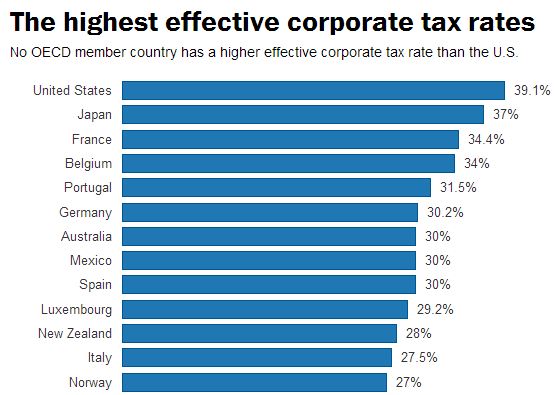 Burger King would hardly be the first large American corporation to move its headquarters—more than 70 U.S. companies have reincorporated overseas since the early 1980s. The practice has been especially popular lately—more than half of those inversions have come since 2003, or almost double the amount that did in the twenty years prior, according to data from Congressional Research Service (CRS).

A Burger King reincorporation, however, would be different from most of those that would have preceded it. The Miami-based burger slinger would be one of the most visible to move overseas, at least in the eyes of the American consumers. The vast majority of corporate headquarter hauls have been executed by pharmaceutical companies, whose brand equity is far less important to sales. Burger King’s business, by comparison, stands to be more significantly impacted if there is any public backlash.

While it’s possible that the plan to reincorporate might be part of need to appease Canadian authorities, which, according to the Investment Canada Act, could block the merger if they believe it is not in the best interests of the country, it would still carry a significant shift in tax payments to the U.S. government.

Independent of what the merger might mean for the company’s corporate tax rates, there are compelling reasons for why one of America’s largest burger chains might choose to team up with Canada’s biggest coffee house.

For one, Burger King has been itching to gain a greater share of the coveted American breakfast market. Breakfast sales at fast food chains have swelled to more than $50 billion. They’re also the industry’s fastest growing segment—breakfast was responsible for 90 percent of the industry’s growth between 2007 and 2012. Tim Hortons offers a particularly strong entry into both the U.S. and Canadian breakfast markets—the coffee chain has more than twice as many stores per capita in Canada than McDonald’s has in the U.S..

Tim Hortons has also been been looking to grow internationally, a process which Burger King’s global footprint might be able to help expedite. “A key driver of these discussions is the potential to leverage Burger King’s worldwide footprint and experience in global development to accelerate Tim Hortons growth in international markets,” the companies said in their statement.

Still, the reality that one of America’s largest food companies is mulling a move to Canada–and in doing so, a move away from U.S. corporate tax rates–might not sit so well with some consumers. Shifty but legal tax maneuvers have proven unkind to food companies in the past. Starbucks saw its sales fall in the United Kingdom for the first time after it became clear the company was using complex accounting methods to lower its local tax payments.

While Starbucks’s case is different—the international coffee house still operates out of Seattle, WA, and pays domestic corporate tax rates—the fact that news of legal corporate tax dodging trickled down to affect customer behavior is telling. If Burger King succeeds in swallowing Tim Hortons, and moving north to Canada, the coming years could prove a good measure of how much Americans actually care about tax-driven corporate patriotism.

Two polls released this week both ask a question that you would hope wouldn't need asking: how many people support...