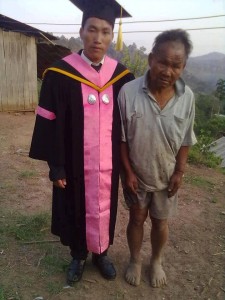 What is termed Social Media can be a vast desert of sorts: an endless vista of parched and barren land, interspersed at sparse intervals by the occasional refreshing oasis. Negotiating Facebook’s plethora of silly cat memes and the photographs of another’s impending supper are the spiritual equivalent of a diet of Splenda packets – a mix of the vapid and narcissistic elements of human endeavor, writ small.  A man’s “timeline” can be a window to his soul and speaks volumes concerning the first things of his being: an ethereal “selfie” delivered for the benefit of disinterested bystanders and perhaps historians as to what captivated and moved 21st century humanity to embrace the utter banality preceding its terminal gasp.  Social media is a powerful looking class – and how we love its utility to view that precious apple of our obsession.

But once in ten thousand posts, a simple picture slams you right between the eyes as it rolls into focus.  This accompanying photograph’s caption needn’t have been included, but it read: “This poor farmer supported his son through college. On graduation day, the son said his father was his biggest pride.” Apparently, it had quite the visceral impact on “your’s truly,” as I burst into tears at its emotional poignancy, and only later tapped into its moral necessity. Within its frame is a study in contrasts: a tall young man in cap and gown standing beside his father. From the clues offered, we can deduce from the father’s: soiled garments, stooped posture, bare feet, rather “modest” home, and humble demeanor, that he is no stranger to labor or privation. He is not one of the world’s self-actualized beautiful people who wear their dignity or accomplishments on an impeccably starched sleeve. He may not even fully comprehend his son’s world, but he knows in his bone marrow the crystalline necessity of his son’s dream – for it has been his and the family’s dream too. And when we come to grips with the knowledge that photographs like this have been taken millions of times on this fearsome globe, we will begin to realize that these family snapshots carry with them the unspoken premises that compel the Conservative vision of Life — and whose successes in turn prepare the groundwork for perpetuating yet another generation’s beautiful dreams – for which Conservatism can stand only as the dutiful midwife.

It is no secret that Conservatives are held to be some of the world’s greatest “bitchers.” Indeed, it has become a 24/7 occupation to stand with arms akimbo astride the track that ferries the freight train of the West — all the while screaming for it to cease and desist in its pilgrimage towards an impending Hara-kiri. So often we define ourselves in the negative – preferring to craft our ethos by denouncing the demons we contend with, rather than by what positive values we would uphold. As guardians of: the eternal fires of faith, the noble civic hearth, family, tradition, and the boundaries that separate sanity from the maelstrom, our strategies appear for the most part defensive, since whole and healthy human beings must rest, laugh, eat, toil, and live their lives in real time – while the devil and his brood, always on the offensive and obsessed only with the “fundamental transformation” of Paradise into Pandemonium, never sleeps. While manning the cultural barricades against utopians, statists, catamites, and race hustlers, whose goal is the dumbed-down and homogenous gerbil cage, it is easy to lose sight of the virtues we affirm. The Left, in its project to obfuscate and deceive, is in the booming business of debasing humanity and selling the Conservative vision as something intellectually and artistically emasculating. If we are to counter their poisons, we must first win this battle of hearts and minds by showing that ours is the better road to achieving temporal happiness (and perhaps more) through Conservatism’s profound understanding of the moral-political – a blueprint that points in the direction of healthy human existence, but does not impose its blessings with a rod of iron.

Intact traditional families, held together by the loving sinews of rugged self-sufficiency and the enduring bonds of faith and moral virtue, are the a priori foundation of a nation worthy of the name America. Moreover, any regime that cultivates or impedes the formation of this natural harmony in the spheres of the Soul and the family hearth must either nourish or impoverish the City. We can talk all we want about economic vitality, free markets, and what grows a standard of living, but unless we address this deep psychological and filial edge in the political equation, we risk treating only the ancillary symptoms of liberalism’s sterile reductionist malaise. Indeed, we duly overlook the fundamental essence of Conservatism as a repository of value and meaning that lies in a place where liberalism cannot bear to look. Grow a million good and strong families, and you needn’t concentrate so intently on building ramparts of stone or steel – your citizens will provide your courage and strength. Grow an effeminate and craven people concerned with only their next meal or pleasure, and you cannot erect walls high enough.

Conservatism takes its fully developed form, not so much in intellectual graphs, pie charts, or the top down imposition of doctrine that wrestles reason from emotion, but in the success and moral-spiritual elevation that comes from little men with squat frames and calloused hands who may never have heard of Adam Smith or Russell Kirk. Yet, no more shining example can be set forth as the foundation for their theories than the invisible lives of numberless men and women who rise before sunrise and return after dark in order to provide an honest way of life for their young — a way of being that is perhaps only a degree better than the inheritance their fathers left them. Such people do not ask much — only that those in power take nothing but their fair share — leaving them unmolested and free to pursue an elusive goal on a horizon that becomes sharper with each setting sun. How many of our “back stories” draw their sustenance from this same rich vein? The Sacrificial Life – the Conservative Life — is its own reward. And the gratitude and love that flow from its tributaries are purer than a mountain stream and wiser than ten thousand volumes. To the slacker and the self-obsessed, this photo makes little sense; until you grow up and realize that worthy dreams are greater and more beautiful than the sum of your own narrow desires.

I love this picture of a father and son I will never meet; but my eye is drawn not to the patent leather shoes or the mortarboard: that symbol of education’s wondrous promise. Instead, it seeks out the filthy shirt and mud caked toes of unspoken sacrifice. For all intents and purposes, this was my father — and this is Conservatism’s magnificent family snapshot.

In Case You Missed It:  Cattle deaths explained? NASA warns of deadly magnetosphere “rifts” that allow intense solar radiation to wipe out large numbers of animals on Earth
Posted in Freedoms.

The Government Accountability Office issued an opinion today that found the Obama Administration "violated" two laws when it ordered the...