(ZILLOW BLOG)Sean Gibbons, 28, has a college degree and makes $65,000 a year as a contract worker for Microsoft. 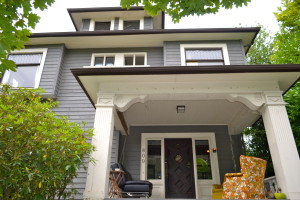 his house on Seattle’s Capitol Hill is shared by 10 young professionals. Photos by Jackie Turner

At his age and income, economists might expect him to buy a house of his own, or at least a condo. Instead, Gibbons is paying about $600 a month in rent to live with nine roommates in a house on Capitol Hill, one of Seattle’s most walkable urban neighborhoods.

“The thought of purchasing a home hasn’t crossed my mind,” he said. “I don’t see myself settling down. … I just have other things that I care more about, like my social life. It’s a time-consuming thing, and if you want to be a homeowner you really have to be knowledgeable about those things, and there’s a fear of making the wrong decision.”

Gibbons is contributing to a dramatic drop in homeownership rates. Economists say young adults in the millennial generation born in the 1980s and ’90s are reaching home-buying age and deciding, in many cases, not to buy a home.

Historically, 43 percent of home purchases were first-time buyers, but now that number is just 30 percent. Meanwhile, the percentage of 24- to 33-year-olds who rent is on the rise, from 47 percent in 2008 to more than 51 percent in 2012.

Economists say the generation staying out of the game is slowing down the housing market’s return.

A majority of more than 100 economists nationwide recently surveyed by Zillow said they expected the homeownership rate in five years to be lower than the current rate of 64.7 percent. The national homeownership rate peaked at 69.2 percent in 2004, just as the housing market was beginning to overheat prior to the Great Recession.

The homeownership rate falling will have ripple effects — both positive and negative — on the economy.

“Millennials will have enormous influence in coming years, especially as they hold off on getting married and having children, the two biggest reasons for first-time home purchases,” said Zillow Chief Economist Dr. Stan Humphries.

Millennials have a variety of reasons for staying out of the housing market. Many of them graduated from college in the middle of the recession and got a slow start on their careers. They may be paying off student loans. In general, they’re waiting longer to get married and have kids.

They have also seen firsthand the risk involved with such a big investment. Jesse Bowen of Atlanta bought an apartment in 2005, taking what he thought was a customary next step after graduating from college and getting his first job.

When he decided to move to another city, the market had worsened, and he chose to rent his place out rather than sell it at a loss.

Now Bowen is married, with a 3-year-old and a baby on the way. He and his wife are thinking of buying in the next three years, but they are wary.

“I think a lot of millennials that came through the economic downturn basically saw people invest heavily into houses, and then in a matter of months it just evaporated,” he said. “I think that scared a lot of people. A lot of people I’ve talked to have said it’s not as important for them to purchase property as it may have been for our parents.”

Of course, it sometimes turns out well.

Thomas Eyler, 28, got lucky when he stumbled on a short-sale condo near downtown Seattle 2.5 years ago. As rents have risen, he has found that he is paying less per month than his friends who are still renting.

Plus, he figures he has picked up about $100,000 in equity. He is not worried about flexibility, because he says if he wanted to move, he could rent his 1-bedroom condo for more than he pays for it.

“I plan on keeping it forever,” he said.

In Case You Missed It:  Governor Cuomo’s Former High Priced Secretary and Close Confidante, Melissa DeRosa, Files for Divorce from her Husband
Posted in Financial and tagged Economy, Financial, United Socialist States of America, US Citizen.

By Alan Caruba : Let’s look at just some of the latest news about the U.S. economy: # According to the Treasury Department’s...