Investigative journalist Richard Behar has written what is possibly the definitive article on the media bias we’ve witnessed during the current Gaza conflict. In just one of many examples of bias featured in his comprehensive piece in Forbes magazine, Behar reserves particular criticism for the New York Times: 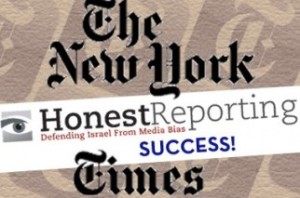 I agree that there’s a lot of nonsense being disseminated about Israel’s war with Hamas, and about the media role in the conflict. And I agree that there is a danger—if people believe that the media, including the New York Times, provides a fair picture of the war in Gaza. (I would argue it is not.)

Since late July, I’ve conducted an in-depth look at the credibility of the media coverage, plus interviews with military experts and some journalists covering the war. Among other things, I’ve discovered that the Times’ most important reporter in Gaza for the past few years has used the late Yasser Arafat as his profile photo on Facebook, and, in a second photo, praised the former Palestinian leader. This suggests that the Times may have less to worry about in terms of Hamas intimidation than others in the press corps. Indeed, this Times reporter’s parallel pieces for Qatar’s Al Jazeera since the war began can only be pleasing to the terrorists.

In late 2012, during Israel’s Operation Pillar of Defense in Gaza, I examined the Facebook page of Fares Akram—the most important Gaza-based reporter for the New York Times. His profile photo was not of himself, but of PLO leader Arafat.  A second photo, still in his album, waxes poetically about Arafat in the context of “heights by great men.”  But Arafat, among many things as the longtime leader of the Palestinians (the 1972 Munich Olympics massacre comes to mind), opted for the Second Intifada in 2000, rather than accept a generous peace offer from Israel.  Before he died, he said on TV that dead Palestinian children are good for the cause. In 2009, following an Israeli air strike that tragically killed his father and a cousin, Akram wrote that “I am finding it hard to distinguish between what the Israelis call terrorists and the Israeli pilots and tank crews who are invading Gaza.” Akram, a Palestinian resident of Gaza, has also published more than a dozen dispatches for Al Jazeera, parallel to his Times reporting, since the war began last month.

What would happen were a Jewish journalist working for the foreign press in Jerusalem use a photo of an Israeli prime minister as their Facebook image? But this would be nothing compared to identifying with a symbol of Palestinian ‘resistance’ responsible for countless terrorist atrocities and the instigator of the so-called Second Intifada.

Knowing this as well as Fares Akram’s work for Al-Jazeera, a Qatari-funded media outlet that is responsible for fomenting unrest throughout the Middle East, how can any New York Times reader possibly trust coverage from Gaza to be in any way balanced or objective?

Behar points out that the issue of intimidation of journalists has not been covered by the New York Times. Indeed, NY Times Jerusalem bureau chief Jodi Rudoren was dismissive of a Foreign Press Association statement condemning Hamas for abusing journalists in Gaza. Perhaps she spoke to her closest colleague in Gaza, Akram, who might never have experienced such abuse as he could be considered by Hamas to be ‘working for the cause.’

The rest of Richard Behar’s investigation into the media coverage of the Gaza conflict “The Media Intifada: Bad Math, Ugly Truths About New York Times In Israel-Hamas War,” deserves to be read to the very end, not only by our own readers but also by Behar’s colleagues in the media who have done so much to let down their profession and blacken Israel’s image.

Share this article and Richard Behar’s report in Forbes as widely as possible on social media networks.

(CNSNews.com) – The mayor of Lynn, Mass. says that some of the illegal aliens from Guatemala who are enrolled in...