By Jennifer Pompi – The Washington Times – 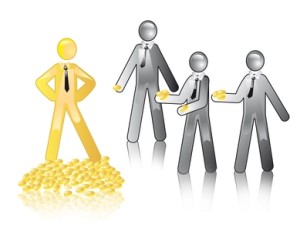 Under President Obama, the richest 10 percent were the only income group of Americans to see their median incomes rise, according to a survey released this week by the Federal Reserve.

The Fed data covered the years 2010-2013, during which period Mr. Obama constantly campaigned against income inequality and won re-election by painting his Republican rival as a tool of Wall Street plutocrats.

“Data from the 2013 [Survey of Consumer Finances] confirm that the shares of income and wealth held by affluent families are at modern historically high levels,” the report said in noting that the median income fell for every 10-percent grouping except the most affluent 10 percent.

“The 2013 SCF reveals substantial disparities in the evolution of income and net worth since the previous time the survey was conducted, in 2010,” the report stated. The SCF is conducted by the Federal reserve triennially and compiles information about family incomes, credit use, net worth and finances.

The 2010-2013 SCF found that even though real gross domestic product grew by 2.1 percent and civilian unemployment fell from 9.9 percent to 7.5 percent, only families at “the very top of the income distribution saw widespread income gains,” though mean median income levels still lagged behind 2007 numbers.

“We will call in and question all of the candidates,” he said. “One of our biggest concerns is who is the candidate’s economic team, because if the present economic team doesn’t change, you are going get the same results.”

The survey also found that family in the middle income bracket (40th to 90th percentiles) saw “very little” change in average real incomes and still have not recovered losses from 2010 and 2007. Families at the bottom of the income distribution continued to see “substantial declines” in average real incomes, a continuing trend from the previous two surveys.

The top percentile of Americans also increased their wealth share since 2010, corresponding to a loss in wealth for the bottom 90 percent of Americans, according to the Fed data.

In Case You Missed It:  Milley Confirms Woodward Book Reports on Undermining President Trump with Calls to China and Meeting on Nuclear Launch Orders
Posted in Financial, Tyranny and tagged Economy, Financial, Obama, Obamanomics, US Citizen.

Liberal failures and the real lessons of Ferguson

Washington Times  By Tom DeLay   Clearly, something tragic happened during the confrontation on the street that day that left a young man...