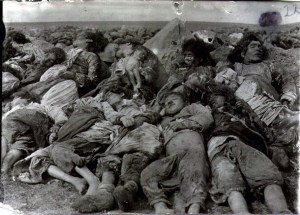 As some have said in the West, in fact, the Armenian, Assyrian, Chaldean, Nestorian and Pontian Greek genocides were “Christian genocides”. On the other side were Muslim Turks and Kurds. The basis in society and justification in conscience of these genocides were Islamic rules. Islam gives permission to all Muslims to kill and rape every non-Muslim, and also to grab all their money and properties. The de facto killers in these genocides were the predatory bands of the “Secret Organization” (In Turkish: Teskilati Mahsusa). The Turks and Kurds who killed their own non-Muslim neighbours, enslaved their women and little girls as sex slaves, and grabbed all their properties, had not had any awareness of “nationalism,” as did their commanders, the leaders of the Union and Progress Organization. So the Turks and Kurds who took part in the Armenian, Assyrian, Chaldean, Nestorian and Pontian Greek genocides massacred innocent humans with pleasure, had not done all this for the benefit of “Turkish nationalism”. They were simple farmers, describing themselves as “Muslim”, but not as “Turkish” or “Kurdish”.

The massacre order of the Union and Progress Organization leaders was a gift for the Turks who lived on as predators for two thousand years, and only can turned to agriculture and the breeding of livestock in Anatolia. They considered it a gift because they got the chance to pillage their “rich” non-Muslim neighbours by the order of their government, and also they could take revenge upon non-Muslims who had, in their eyes, a great deal of money.

Kurds, who were living in the same region for thousands of years and didn’t have ability, aptitude and historical experience except in the jobs of agriculture and the breeding of livestock, like their Turkish coreligionists, became happy too, because they would, along with the Turks, pillage the money and properties of the non-Muslims.

Muslim Turks and Kurds pulled their non-Muslim neighbours to pieces with the appetite and wildness of hyenas without any mercy; moreover, they gloated over all of this. They grabbed all the houses and stores of the non-Muslims, and they enslaved the women of non-Muslims as sex slaves and also domestic slaves in their “harems” as their “booty,” as it is ordered in the rules of Islam. And they sold some of these women and girls at the slave bazaars for a bit of money.

The perpetrators of this terrible period didn’t feel any self-reproach; on the contrary, they were very happy, because they became more worthy of Allah, the god of Islam. They became better Muslims with these disgusting massacres. So they came closer to the heaven of Islam, with its many houris (group sex) and open buffet bar (rivers of kevser wines).

They were in peace because they were obeying the laws of their own god, Allah, and the government.

They raped tiny girls and women, slaughtered innocent humans, burned children alive, and massacred millions of non-Muslims by the order of the “peace” religion Islam.

Because their Allah was very merciless to the ones who disbelieved.

Media Coverage in the “Affirmation Age”

The war in Gaza has produced an unusually rich analysis of media coverage of the Middle East, including a landmark...