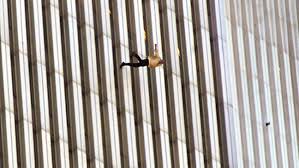 Having careened down the rabbit hole into the Bizarro world of America 2014, wherein half the population has consumed their full draught of the Waters of Moral Forgetfulness, we are now come to a great crossroads: whether to claw our way back up into the light or continue on as credulous lemmings in search of flight. As we face wars and the rumors thereof and enemies both certain and virulent, it is imperative now that we drown out the cacophony of effeminate voices that incessantly bleat their advocacies into our degraded public square and instead zero out our moral compasses to the adamantine reality of 9/11: the day that America was brutally stirred from its lethargic dreams of pleasure with the pungent stench of blood, broken iron and sulfur.

The actions of that day now seem shrouded in the vague narcotic of time, even though a scant dozen years have elapsed since a civilizational war was declared on the West by the forces of Fundamentalist Islam on an American soil that was thought to be virtually impregnable. Of 9/11’s occurrence we know with a historical certitude, although we find it anymore too painful to speak of: like the drenching of an open vein with mercurochrome.  In our schools, 9/11 has faded to the size of an obscure factoid, like the date of the Louisiana Purchase.  Moreover, its horrendous images are deemed to be overtly frightening to the young, while the narrative of a friendly Giant who has been sucker-punched by malevolent dwarves is deemed to be incongruent with the aims of a multi-culturalist curriculum that above all propagates the lie of moral equivalency and the immolation of American Exceptionalism.  Those insatiable termites of the Left, while unable to totally obscure what was at once a coordinated and monumentally successful multi-wave attack on American soil, nevertheless have labored incessantly to deconstruct the event as either the isolated madness of fringe elements or as the karma-drenched comeuppance owed to Western Imperialism for an endless catalogue of moral crimes against the weak but morally righteous.  In truth, the dust from the fallen towers had scarcely settled before the spiders began spinning their ideological webs of justification.

And what webs they were. Countless accusations of domestic complicity radiating from the American canker of privilege and pride were thrust high and wild, implicating: Israel, the Paranoid Right, the American Military, and Globalist cabals.  Through jaundiced eyes anchored in self-loathing, intellectuals and lunatic skeptics called a pox down upon our House– while on the far side of the earth much of the morally superior Middle East symbolically passed out sweets to one another in joyous rapture as the Great Christian behemoth was at last brought down to its knees in sackcloth and ashes.

And so began America’s noble effort in draining the fetid swamps of Islam: the moral charnel house of the world; and our attempt to administer an I.V. on a civilization that had been choking for a millennia and a half on the parched earth of Strong Men, slavish totalism, and the sclerotic consciousness of a “God-imposed” system of justified brutalities. Those who “knew better” claimed that by eliminating the authoritarian tyranny of might, we might prime the pump of freedom and rational self-determination to the tune of Locke and Montesquieu. Thereafter, the destruction of Saddam Hussein and eventually every autocrat in the Fertile Crescent would only accelerate the process of resetting Arab civilization. And as “wise and thoughtful” men applauded the subsequent overthrow of Libya’s and Egypt’s autocrats, the region would soon fulfill the fertile promise of an Islamic Reformation:  a Muslim Enlightenment.  Indeed, such a scenario would embody the final incarnation of the Progressive world established under the aegis of Barack Obama: the Messiah of Post- American power. And thus, our Great Light-Bearer would therein bring about his vision of a multi-polar paradise to fruition—free from the wicked entanglements of the contemptible Occident.

But such airy fantasies, when exposed to oxygen, must inevitably come crashing down: creating seismic waves that spread far beyond the scope of good but vapid intentions. Having been groomed in the Halls of American Liberalism, neither Obama nor his cadre of ideological misfits were educated to the fact that no Enlightenment or Reformation is possible in Islam because the Islamic superstructure is rooted in the totalitarian subjugation of man. The overthrow of military figureheads within an Islamic society (one that is by definition drowning in inequality and theological fatalism) is of its own insufficient for tranquility and progress to occur. Islam, both root and branch,  is not only devoid of the capacity to sustain liberal institutions and self-sustaining economies, but  it is antithetical to a consciousness of free human inquiry.  The Arab Spring, that vaunted hope of the cock-eyed Western Academic, has not only shown itself to be a dagger in the heart of the ideologically feckless West, but the sure equivalent of a  political-cultural tsunami in a region that had already suffered mightily under the authoritarian lash.  In practice, Fundamentalist Islamic societies, fueled by their Shar’ia based legal barbarisms, have no other practical resort but to return to their core ethos of repression/submission and god-ordained inequality once their autocrat du jour is deposed: like a dog that returns to its vomit.  Instead of becoming a healing balm to the region, The Arab Spring has destabilized and increased human suffering exponentially, while evangelically laboring to bring to power forces that are not only inconsistent with human flourishing, but are intractably hostile to the ethos and political character of the Cosmopolitan West.

If America were to draw any lesson from the abomination that was 9/11, it should have been that our interests were antithetical to Islamic Fundamentalism and that any reticence in answering force with force betrays such interests. Somewhere along the line, however, our foreign policy has gone radically haywire.  The Obama administration, having never ideologically accepted the true causes of 9/11, has instead now undertaken the unthinkable and treacherous course of making common cause with the Syrian Al-Nusra (Al Qaeda) rebels while tying the hands of our only true friend in the region: Israel.  Indeed, there can no longer be any doubt that the Obama administration was funneling support and weaponry into the region: effectively stoking the Arab Spring and transforming a barely containable situation into a veritable powder keg.  Having never comprehended the first principles of realpolitik that flow from human nature, the Obama foreign policy has enmeshed itself into a viper’s nest in the hopes of becoming a power broker to a client that wants nothing more than our collective heads on a pike.  In misunderstanding, or better yet, refusing to comprehend the importance of 9/11, Obama and his minions are not only responsible for treasonous acts that have brought Americans to terrible bloody ends in Benghazi, but their actions have perched the world on the precipice of nuclear war– with Russia and Iran waiting in the wings for an ego-induced preemptive strike emanating from Obama’s obtuse ethical principles. It is abundantly clear that under the pressure of statecraft, Barack Obama has shown our adversaries his true colors. He is now perceived as a hubris-laden political rube: a paper suit in a savage and unforgiving region.

In waiting for the other Syrian shoe to drop in the shadow of that infamous anniversary, it might now be instructive if we were to accede to the limits of American power in triangulating the hearts and minds of a civilization that has damn little respect for the pillars that we hold dear as a people—the foremost being the freedom of conscience and its political corollary of limited government. Too many thousands of our beloveds have perished, both in that Manhattan graveyard of glass and steel or on those infernal sand encrusted haunts of cruelty. Listen well: It is the apex of insanity for America to become ideologically mired in a Progressive’s Fool’s Errand of Liberation by allowing ourselves to be transformed into veritable janissaries—fodder for Arabs whose congenital hatred for one another is only matched by their revulsion toward the infidel. Even now, we are being bombarded with the Obama administration’s selective indignation against one group of merciless killers on the behalf of another as we are shown children in the death throes of Sarin gas.  Meanwhile, the pedigree of that footage is highly suspect and equally balanced by reports of those rebel “George Washingtons” putting to the sword entire Christian villages. When evil is battling evil, sometimes it is more prudent to move out of the way than to embroil ourselves in the instrumental horror that Islam has fomented since its megalomaniacal founder set his earthbound tenets of hell into motion.  Whether Assad or the Rebels ultimately prevail, it will not be to our advantage.  As a footnote, Isaiah the prophet has foretold that the City of Damascus will be one day reduced to a ruin and inhabited no more—but that is another story for another time.

As for me, I am continually haunted by the scenes of men and women on that most horrific of days plunging to their deaths to escape the inferno of white hot hatred perpetrated by the advance guard of Fundamentalist Islam, who number at least 100 million in conservative terms. Nevertheless, if any solace can be gleaned from this calamity, it is that the sleeper awoke on that day and began strengthening the pillars of his stronghold: although even that is provisional in the Age of Obama.  A great evil exists in the world, and it has sunk its roots deep into the earth—even in America that wicked force is entrenched and would have us return fecklessly to our slumbering extinction.  Let 9/11 forever remain a battle cry: bringing up from our chests the greatest things that yet lie within us; and let us hold forth against such black tyranny while the light of day yet remains.  Tomorrow will have enough evil of its own.

Glenn Fairman writes from Highland, Ca. He can be contacted at [email protected]

After Sen. Ted Cruz was booed off the stage at a gathering of Middle Eastern Christians for making pro-Israel comments,...