By Douglas V. Gibbs :  The attacks against the United States on New York City’s Twin Towers at the World Trade Center, the Pentagon located just outside of Washington DC in Arlington County, Virginia and Flight 93 on September 11, 2001 was not a tragedy, but an act of war against the United States of America.  Tragedy is defined as, “An event causing great suffering, destruction, and distress, such as a serious accident, crime, or natural catastrophe.”  The flight of planes hijacked by terrorists and flown into the two towers, and the Pentagon, was not a serious accident, a crime, or a natural catastrophe. 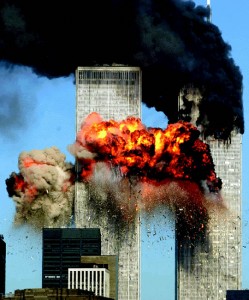 Those planes were flown into those American targets for the full and purposeful intent to kill as many people as possible, and to create an atmosphere of fear in the United States.  Those that originally called the event a tragedy take away from what really happened.  9/11 was an act of war by Islam directed at the United States.

I visited Ground Zero thirteen months after the act of war committed against the United States. On that day in October of 2002 I bought a hat with an image of the twin towers, and the words “Never Forget,” on it. A small painting with the firemen hoisting the American Flag was on sale nearby, and I bought that too.

When I walked up to the green fencing surrounding the hole that used to be the World Trade Center’s Twin Towers, I didn’t know what to expect. I had never seen the Twin Towers in person. This was my first trip to New York City.

I peered through a hole that had been torn in the green fabric on the construction fencing, and as I looked down I witnessed a huge hole in the ground with twisted subway tracks at the bottom. To my left, on a building that had sustained a little damage, hung a giant mural of the American Flag, and the words “Never Forget.”

A man standing beside me looked through the hole in the fencing as I pulled away from it. After he spent a few moments looking through the hole, I said, “I never saw what they looked like.”

“You mean the towers?” he asked.

“Yeah, the World Trade Center. This is my first trip to New York. I’m from Los Angeles, and I never saw what the towers looked like.”

“They towered over the other skyscrapers. Now, when you are outside the city, and you look towards the city, you can tell that something is missing. The skyline is not the same.”

We were silent for a moment, then he asked, “Have you seen the Statue of Liberty?”

My eyes began to well up with tears as I recounted the experience of meeting Lady Liberty for the first time, even though I couldn’t get close enough to touch her, or go inside, because of heightened security.

“I was at the Arlington Cemetery yesterday. Saw the Statue of Liberty this morning. Then we came here.”

The man turned to face me, his eyes, and the cheeks below them, were wet. “I worked in the towers,” he said. “I was running late to work, that morning. I watched the planes fly into the towers from my car. I was supposed to be in them that morning. The towers, I mean. I haven’t been back here since. Today is my first visit to the hole that once was the twin towers since it happened.

“I lost a lot of friends, that day,” he continued. “People were running in all directions. We didn’t know what to think. We just knew that what was happening was horrible. When the second plane flew into the tower, I knew it was no accident. They meant to do this. They meant to kill thousands of people.

I didn’t know what to say, but as I looked around I noticed that we were no longer alone. A group of about twenty people had surrounded us, listening to the man tell me about the day the towers fell. Some of them were probably locals, but most of them were probably tourists. Nonetheless, they were all crying. They were crying with him, feeling his grief. Feeling his pain.

Reaching over, I placed my hand on the man’s shoulder, and he suddenly, to my surprise, reached over and pulled me into a hug. He wept on my shoulder like a child, releasing the anger and pain of a year’s worth. Nobody walked away. Everyone remained around us, each with their head bowed, mourning with him, praying for all of us.

Afterward, we shook hands, and as he looked me in the eye he said, “Never forget.”

Another tear rolled down his wet cheeks.

I nodded, but said nothing as our hands separated, and the man walked away. The crowd slowly dispersed, and my wife walked up to me after walking up from around the corner asking, “Did I miss something?”

“Yeah,” I said, “But I couldn’t describe it properly if I tried.”

It was at that moment that 9/11 truly became alive to me. The disconnect I had before, being a West Coast Southern Californian, was gone. The image of the hole below became etched in my memory. The tears of the people around me as the man that had lost his skyline wept remains with me still.

A family member later bought a book for me titled Portraits 9/11/01, which is the collected Portraits of Grief from the New York Times, and I read each and every one of the portraits of the people listed in that book. Another book, given to me by my mother, titled Report From Ground Zero by Dennis Smith, who was one of the firefighters on the scene, served to educate me more on what happened that day, and each day that followed.

I have a portrait of the World Trade Center on my office wall. It actually has two images in it, both showing what the skyline looked like before 9/11, with the two towers dominating the scene. At the bottom the words read, “World Trade means World Peace.”

Unfortunately, to those 19 hijackers on September 11, 2001, peace was the last thing on their mind. Instead of peace, on that morning, two hijacked jetliners struck the twin towers of the World Trade Center. The 110 stories of both towers collapsed, and nearly 3,000 men, women and children died that day in an act of war against the United States committed by an angry hybrid of politics and religion still embracing middle ages barbarism that claims to be a religion of peace.

The man who wept told me to never forget.

We Shall Never Forget.

By Jim ONeill “It isn’t so much that liberals are ignorant.  It’s just that they know so many things that...