(Source: Deutsche Welle)  A top German virologist has caused shockwaves by asserting that it’s too late to halt the spread of Ebola in Sierra Leone and Liberia and that five million people will die, noting that efforts should now be focused on stopping the transmission of the virus to other countries. 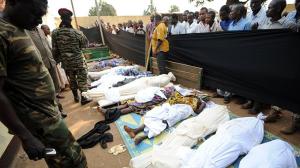 Jonas Schmidt-Chanasit of the Bernhard Nocht Institute for Tropical Medicine in Hamburg told Germany’s Deutsche Welle that hope is all but lost for the inhabitants of Sierra Leone and Liberia and that the virus will only “burn itself out” when it has infected the entire population and killed five million people.

“The right time to get this epidemic under control in these countries has been missed,” said Schmidt-Chanasit. “That time was May and June. “Now it is too late.”

The current Ebola outbreak in West Africa has killed over 2200 people, with Liberia and Sierra Leone accounting for over 1700 of those fatalities.

While calling for “massive help” from the international community to prevent Ebola appearing in other countries like Nigeria and Senegal, Schmidt-Chanasit warns that getting a grip on the epidemic in Liberia and Sierra Leone is a departure from reality.

German aid organization Welthungerhilfe blasted Schmidt-Chanasit for his comments, with Sierra Leone based coordinator Jochen Moninger labeling his statements, “dangerous and moreover, not correct.” However, Moninger acknowledged that Schmidt-Chanasit’s assessment may be accurate in the case of Liberia.

The World Health Organization refused to comment on Schmidt-Chanasit’s remarks.

Although Ebola continues to rage in five African countries, media coverage of the epidemic has waned, despite evidence that the virus has mutated.

As we reported last month, former FDA official Scott Gottlieb, M.D. warned that if the virus was to hit the United States, the CDC would enact emergency procedures which could lead to healthy Americans who show no symptoms of the diseased being forcibly detained for an indefinite period of time.

Scientists in Canada and Canada’s Public Health Agency have both acknowledged that the virus has likely gone airborne at least to a limited degree, while the CDC has urged airline staff to take steps to prevent the airborne spread of the virus, including giving suspected Ebola victims surgical masks as well as directing staff to “not use compressed air, which might spread infectious material through the air.”

UPDATE: After this article was published, the “5 million” quote from the original Deutsche Welle report was removed and the headline was changed. The original text can be read here. It is not known why Deutsche Welle changed the wording of the report without issuing a formal retraction.

In Case You Missed It:  Study: Over Half of Migrants and Refugees Are on American Taxpayer-Funded Welfare
Posted in Freedoms and tagged Africa, Health And Human Services, Healthcare.

By Dr. Robert R. Owens : Our President has made no secret of what his end game is.  Remember him with...