The U.S. Census Bureau reported Tuesday that household income for noncitizens working in the United States rose 6.0 percent between 2012 and 2013, 15 times more than the paltry 0.4 percent increase for households led by native-born U.S. workers. 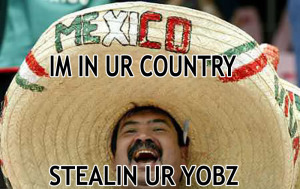 Republicans have argued for months that the effort by Democrats to ease immigration rules would make it easier for noncitizens to find jobs, at the expense of U.S. citizens. The Census report seems to indicate that may already be happening, as it shows native U.S. household income was almost flat between 2012 and 2013, while income for foreign born residents rose much more.

Census stressed that its estimates were just that — estimates. But its 90 percent confidence intervals still indicate a wide difference between income for citizen and non-citizen income — it also indicates that the income of some households led by native U.S. workers actually declined between 2012 and 2013.

Census released its report on the same day that the Congressional Research Service released a memo that said enacting the Senate’s comprehensive immigration legislation would increase the population of foreign-born U.S. residents by 10 million above normal growth rates over the next eight years.

The assessment was made at the request of the Senate Judiciary Committee, which asked CRS to examine how immigration trends might change under the Senate’s legislation.

The House has said for more than a year that it won’t pass the Senate bill, in large part because of fears that it would create a path to citizenship for illegal immigrants. Many Republicans say that would only help attract more illegal immigrants, much in the same way that, Republicans argue, the Obama administration’s deferred deportation action for younger immigrants has lured thousands of children to the southern U.S. border.

The CRS assessment is likely to bolster those fears among Republicans. CRS said that while it’s difficult to estimate future populations, an examination of the growth of the foreign-born population in the U.S. over the last 40 years indicates that if nothing changes, there would be about 58.3 million foreign-born U.S. residents by 2022.

The Senate letter asked CRS to then compute the foreign-born population using estimates from the Congressional Budget Office, assuming the Senate bill were implemented. CRS said it got 68.3 million using those estimates.

In a footnote, CRS said it would prefer to use slower growth rates for the foreign-born population. But even doing that, CRS found a 10 million difference by 2022 between enacting and not enacting the Senate bill.

Government Insider Warned of HealthCare.gov Security Risks: ‘I Am Tired of the Cover Ups’

Government insiders who flagged security issues prior to the launch of HealthCare.gov were right to be concerned. That’s according to...