By Glenn Fairman and Brad Nelson 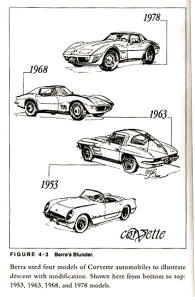 In 1990, evolutionist Tim Berra used the “evolution” of Corvette models as an apt analogy to describe the existing fossil record and to defend the prevailing Darwinian models from the persistent attacks of Luddite Creationists. He described it this way:

“If you compare a 1953 and a 1954 Corvette, side by side, then a 1954 and a 1955 model, and so on, the descent with modification is overwhelmingly obvious.  This is what paleontologists do with fossils, and the evidence is so solid and comprehensive that it cannot be denied by reasonable people.”

But often, what appears indisputable and reasonable to one man is folly in another’s eyes. Using Corvettes to analogize Darwin’s “non-directed descent with modification” misrepresents a fossil record already inhospitable to their paradigm. In fact, it actually distorts the interpretation of evidence by virtue of their model’s a priori assumptions. With scant examples of indisputable transitional links that might buttress a case for macro-evolution’s mechanism, an astute observer without an axe to grind might conclude that descent with modification was in actuality –“design with modification.”

Indeed, since that sleek and hearty race of Corvettes owes its existence, not to the congealing of fortune, but to a team of exacting designers, Mr. Berra unwittingly let the cat out of the proverbial bag by illustrating that variations of morphology predicated on a common theme more logically belongs to the realm of purposeful Mind. Builders of bridges might use a variety of engineering motifs to reach their goal, but when elegance and economy are taken into consideration along with pragmatism, we generally encounter variations on a tried and true idea that experience has validated. If anything, it is the evolution of engineering knowledge, a function of non-materialist information, that allows designers to proceed from the humble beginnings of manufacturing oxcarts to the sublime form of the Ferrari Testarossa.  And even if we were to discount the Biblical Creation story from our present consideration, the enthusiastic but fantastically unlikely expectation that a chance-formed paramecium eventually yields an Arabian stallion, by virtue of a common ancestor at the dawn of the world, only really makes sense if that Ancestor sprang from the full blown teleological intent of a Designer.

What would eventually be termed “Berra’s Blunder” by Phillip Johnson illuminates another hole in the Swiss-cheese-like logic of Science’s consecrated worldview: the idea that men are but the serendipitous byproducts of an unintended random sequence of events. The “Accidental Man,” if you will, is pure matter without essence or telos. Life, according to Darwin, is the result of the yokel universe rolling an infinite number of sevens while drunk on its behind from free cocktails; and we are just the latest busload of enthusiastic beneficiaries to roll into the Cosmic Keno Hall of Dumb Luck.

Right now, Charles Darwin may be rolling in his grave, having been set into bodily motion by the conclusion that chance alone cannot account for proteins which are made up of hundreds, even thousands, of unique chains of amino acids. And there is no life as we know it without proteins. They are the nano-machinery of the cell.

Such discoveries, such as the centrality and complexity of proteins to cell functioning (and thus to the functioning of all life), call into question the idea that macro-evolution’s mutations, combined with natural selection, are the twin engines of biotic transformation. Indeed, you can’t build a functioning hundred-chain protein, piece by piece, any more than you can build a functioning suspension bridge — and also drive across it at every stage of construction.  Cars cannot successfully navigate a quarter-completed bridge while it is being gradually assembled; so like Sinatra sings, it’s “all or nothing at all” — unless you love the water.  A quarter-completed protein cannot fulfill the highly-specific tasks necessary for cell performance. In reality, all of random evolution’s purely theoretically increments necessary to arrive at a viable product would provide no function, and thus could not be selected for under the theory of natural selection. Much like the reality of a bridge, the implication is that these proteins must be designed and constructed according to an entire plan and are non-functional in regards to their purpose until completed.

Nor does random chance alone account for the assemblage of such complex and rare proteins. Even if the probabilistic resources of the entire universe since its inception — every atom and every Eve, as it were — were part of the alleged “primordial ooze” (which exists mainly in the realm of speculation) the chances would still be astronomically minuscule for that mode of assembly. According to Stephen Meyer in Signature in the Cell,

Their [Robert Sauer’s team at MIT] most clear-cut experiments seemed to indicate that . . . the probability of achieving a functional sequence of amino acids in several known (roughly 100 amino acid) proteins at random is . . . about 1 chance in 1063 (to put this in perspective, there are 1065 atoms in our galaxy).

[Douglas] Axe’s experimental findings suggest that Hoyle’s guesses were pretty good. If we assume that a minimally complex cell needs at least 250 proteins of, on average, 150 amino acids and that the probability of producing just one such protein is 1 in 10164 as calculated above, then the probability of producing all the necessary proteins needed to service a minimally complex cell is 1 in 10164 multiplied by itself 250 times, or 1 in 1041,000.

Therefore, if chance can’t do it, and if gradual construction of life’s building blocks from point mutations won’t do it, that doesn’t leave much grist left for Darwin’s Mill.

Just so we are crystal clear, what we address are not the adaptation and variation of finch beaks (a case of micro-evolution) or bacteria’s immunity to antibiotics. Such micro-evolution obviously can and does happen. But this type of evolution acts on pre-existing information which occurs in an enormously complex form — allowing mere bits of information (or point mutations) to turn on one assemblage of genetic information instead of another: brown eyes or blue eyes for example. But there is no known process for mere point mutations to construct anything as complex as eyes themselves. At best, point mutations work like dumb dip switches: having the capacity (as lab experiments with fruit flies have shown) to either put legs on the top of one’s head or not to put legs on the top of one’s head (either could be useful depending upon one’s definition of “evolved”). But as for the construction of the legs themselves, point mutations have never been shown to get you to the dance. And there is no reason to believe that this process can, given sufficient enough time, mold something into anything else — a fish into a bird, for instance.

Darwin, to say the least, would be humbled at the vast complexity that biologists are only now beginning to understand – and they are themselves only scratching the surface. To be charitable, he had no way of knowing that the cell was anything more than an enigma. What was, in Thomas Henry Huxley’s time, considered a formless and somewhat magical “protoplasm” turns out to be a literal galaxy of library-length information and choreographed purpose — an amazing nano-factory of jaw-dropping complex proteins and processes.

The cracks in the foundation of Neo-Darwinism, and its unconscious assumptions, may point to the reality that its days are numbered as a paradigm. But nevertheless, the ideology undergirding its materialist gospel is still intact and accorded the hallowed stature akin to a quasi-physical law. Like a medieval virgin, its pedigree is forbidden to be questioned by its devotees inhabiting that “Ivory City of Reason.” Ironically, the creed buttressing Man’s secular Creation Myth has been promulgated by fatwa to be revered as an unassailable article of faith, and infidelity to its confession carries with it a one way trip on a Siberian railcar to the outer darkness of professional irrelevance. Tough crowd those greybeards!

Now, even the vacuous Miley Cyrus knows that Corvettes do not assemble themselves in a primordial soup, nor does Fred Hoyle’s marvelous Darwinian analogy of a tornado’s immense undirected energy fabricating a 747 on the outskirts of a junk yard pass intellectual muster— even if given 15 billion years to complete the Boeing contract. Moreover, a pocket watch found on the Jersey shoreline is assumed to have been the work of a craftsman, and to hold that an eternity of time and chance led to its haphazard formation could get you exiled to Cloud Cuckoo Heaven throwing back shots of Johnny Walker Black with Christopher Hitchens. That roomful of monkeys is still typing away trying to get Hamlet right, and all we have to show for their efforts is an astronomical produce bill and the screenplay to Noah.

It is axiomatic that a thing bearing all the intricate and structural artifacts of design should infer the existence of a Designer. A thing, through its own unformed necessity, does not spring from the vault of nothingness unbidden, nor does a child’s bedroom spontaneously organize itself without the threat of a video game embargo. Clocks wind down and babies grow old and die. We swim in entropy, and the 2nd Law of Thermodynamics is just a fancy term for the deplorable state of my once Grecian waistline.

Yet miraculously, whenever organic living things are considered, macro-evolution and its attending natural selection are the default explanation, even though the sheer complexity of a replicating life form as simple as an amoeba is orders of magnitude more complex than a Hoyle’s 747. And if you doubt this, consider the sheer quantity of aircraft that have been built over a century and compare that to the dearth of life forms that have been birthed in highly controlled laboratories by geek scientists — and answer that challenge ex nihilo — without hijacking existing goodies from God’s refrigerator. Evolutionary alchemists: Command that these stones should be made bread!

To cling to the magical supposition that life spontaneously generates and self-organizes from molten pools of rock and water, knowing what we now know a century and a half after Darwin’s Big Idea, would make Galileo shake his damned head at how much Science has become a repository of reaction — at least in regards to biological origins, cosmology, and politicized hysterias like Global Warming. Indeed, it is no less than a clerisy whose auto-da-fe’ values the confession of orthodoxy prior to its inquiry into the truth of a matter. If Science’s inconvenient discoveries are to be continually shoehorned into the prevailing dogma like Oprah into a Halle Berry negligee, what does this tell us about Science being the only legitimate vehicle for the harvesting of truth? If ideologues masquerading as disinterested pilgrims feel compelled to hold Occam’s razor to Minerva’s throat, then at least do it with the appearance of grace and objectivity. One way or another, Darwin’s creaking hot mess is coming down — even as today’s Galileo mutters under his breath while kissing the faculty ring: “Yet, it moves.”

Such a dogged intransigence calls into question the verdict that where Science is concerned, her own apostles’ quality of faith is inferior to that of the Saints. To quote Jesus: “Verily I say unto you, I have not found so great a faith, no, not even in Israel.” Such ardent certitude is greater than an entire field of mustard seeds growing at the foot of a mountain – waiting to be thrown down into the depths of the sea.

Glenn Fairman and Brad Nelson are the Clark Kent and Perry White of StubbornThings. We welcome your correspondence at [email protected] and at www.stubbornthings.org.

In Case You Missed It:  Norway reclassifies Covid-19: No more dangerous than ordinary flu
Posted in Freedoms.

For Lawmakers, an ‘Agonizing’ Decision on How to Confront ISIS

One popular notion is that members of Congress who oppose helping Syrian rebels confront the Islamic State terrorists fall into one of...