Scotland had their was chance to save itself and breakaway from having their affairs controlled by  globalist and progressives. 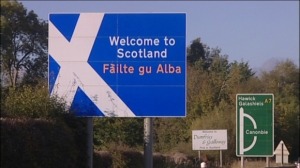 It would have been hilarious to see the globalist leftist  sweat as Scotland voting yes would have had a domino effect around the world from Catalan to even several states in the USA where a recent poll reveled that 1 on 4 Americans are open to secession from the United States.  The globalists dreams for a one nation world with the 1% running it – would have been scuppered.

The only few leaders such as Putin’s Russia fighting this globalist leftist agenda and they are paying a heavy price. As the EU-USA backed a revolution in Kiev that led to the current unrest and, Putin is taking all the blame for the end result. Expect China to also suffer due to progressive condemnation as would anyone that disagrees with them, conservatives in the USA being called terrorist, racist anything to shut them into submission of the leftist agenda and the massive immigration that will soon make them irrelevant.

It was a moment of truth as globalist employees Clinton, Obama and Cameron revealed who they really work for.

The Guardian also showed its true side calling for a “NO” vote. That reminded me of Jon Stewart, another darling of the Left in the US- who criticized Wall Street for years yet as soon as movement like Occupy Wall Street begins, he totally mocks and degrades it. Please Guardian – no more negative articles about banksters, the government and Washington. No more Wikileaks or Snowden revelations. Like the majority of Scots, you criticize the elites yet still support them.

So what does Scotland have to look forward to?

Middle East Wars supported by your tax dollars and turning them into terrorist havens, bank bail outs, taxation massive welfare and handouts to Royal families not to mention little influence over your own affairs and massive immigration from the 3rd world,  eroding on your own rich culture to please the immigrants, all in the name of ‘equality’.

A one nation world of multiculturalism and identikit cultures and shopping malls run by the 1% receiving favors from the politicians.  Like the cockney and scouse accents, the unique Scottish accent will eventually die out and be replaced with  ‘multiculturalism’.  Immigration will be rife and any culture or concept of Scottishness will evaporate in the next century, it’s already happening.  Even in the USA today Multiculturalism the term literally meaning ‘many cultures’ is a popular coined term used by progressive than the previous term used ‘E pluribus unum’ Latin for “Out of many, one“. Its no longer many  immigrants of the world come into the USA to become one American Culture. Today the progressive have  multicultures all living individually, not becoming one– but many.

People get their governments and the system they deserve and most people are cowards- afraid of change, rather stick to the devil you know. That’’s the beauty of democracy by those in power – they always get their way.

Scotland – the not so brave, RIP.

In Case You Missed It:  DoD data show that 60% of "covid" hospitalizations in 65 and older patients are "fully vaccinated"
Posted in Freedoms and tagged Freedom, Immigration, Liberalism, Political Correctness, Scotland, United Kingdom.