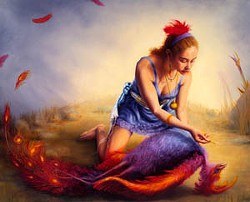 As mankind continues to relentlessly explore those uncharted regions of his Labyrinth of Horrors, have we any inkling of what we have bartered for his final tumultuous Main Event? We, who have grown anesthetized to the anthropomorphic-spawned tremors of the world, would marvel at the vertigo our culture would now induce in men who breathed air a scant century hence.  Oh, the machines we have set into motion and the devils we have unleashed on an unsuspecting Universe!  And while tethering one’s soul to a meteorite entitles one to a dizzying panorama of burning horizons, such vistas accompany the fleeting perspectives of itinerancy; and with these, a shabby vagabond morality reserved for those whose only loyal companions are an insatiable taste for the vulgar and the gnawing passion to bring to fruition that sterile El Dorado – that utopian hallucination that refuses to take form and vanishes like a ghost in the millisecond between sleep and wakefulness.

Contemporary Man’s self-engineered blessing has boomeranged into a seven-fold curse, stripping him of whatever dignity he had retained following his emergence from the acid baths of the Enlightenment and the slums of Post-Modernity. Having been perpetually harangued by our “betters” that the metaphysics our fathers girded their lives with were no more than fables shrewdly applied for our control, Modernity’s melancholia for a now vacant heaven was replaced in due time with a procession of ambitions and appetites more worthy of the self-creating palate.  As man’s obsession for philosophic mastery over the Sphinx-like confidences of the Universe lay flayed open into discreet parts – its resulting wreckage utterly mute to the question of human purpose, Deconstruction’s shallow and cynical reduction of truth to a “will to power” would accept no authoritative verdict but its own acrid solipsism. Indeed, any humanist creed is by nature reflexively antagonistic whenever the subject of an intended destination for Homo sapiens is even casually entertained. The long knives of the intellectual class are ruthlessly flashed when the slightest aromatic whiff of otherworldliness enters their exacting nostrils.

Perhaps it was foretold by some intoxicated philosopher-prophet that when a civilization’s gods and heroes come crashing down and the leadened skies no longer answer, liberation would be the sole avenue remaining for humanity in crisis. Many would hold that man is inherently an amiable savage and that lifting his restrictions allows that natural gregariousness to flourish; and that he is only made dour and spiteful by mal-education or the corrupt social chains that twist him into a surly cur. Nevertheless, such experimentation has been occurring for thousands of human cycles and we have all witnessed with our own two eyes what occurs when the young are given a pass in their civilizing.  Raw purposeless freedom unchecked in both dogs and men produces a commodity that ill-serves others and themselves.  The anarchy within our members screams out to be directed and tamed to a good end, and so indiscriminate freedom must be tempered by liberty: a sphere of action where rights and duties combine with a moral and civic education to produce virtues which are considered to be classically American in their temperament.

When crafting constitutions and compacts, it is imperative that founders of cities understand the warp and weft of those people who will live under the tutelage of their laws. If men were gods, legislation would be unnecessary; and if they were devils, then they must be ruled by necessity with a rod of iron. Since we possess a middling nature that aspires to virtue but retains its feet of clay, then Americans – a historically stiff-necked roguish sort who set their roots down in the fecund soil of self-sufficiency and who seem culturally pre-disposed to  affirming a god of nature or nature’s god, must be governed with a delicate balance of liberty and order.  In fact, such a balancing act would seem to be the very hub of our genius. A healthy skepticism for amassed governmental power, rugged individualism, a near-congenital hatred of tyranny, longsuffering courage, a wary egalitarianism and a grass-roots humility have been the most attractive features of our national character. And if we are failing as a people, then it is because we have abandoned our first love: the civic religion of our founding – and consequently, those virtues that walk in unison.

Having become a post-constitutional people because our intellectual grandees have rejected the endowment of our first principles has led to the downfall of our American character. By offering “strange fire” on our civic altars in the forms of Marxism, Hegelianism, and every other misbegotten strain of individual and egalitarian dogma foreign to our heritage, these dwarves have bestowed a Judas Kiss betraying the idea of America. If only they had looked with our fathers’ eyes, would they not have reflected upon the Aristotelian circularity encompassing the American regime? In truth, the best legislation proceeds from enlightened men cultivating a system of laws consistent with nature and proffered with a view towards moral and civic uplift: the veritable good regime reclaimed from antiquity. Moreover, wise and prudent governance so habituates each generation to cherish those laws that promote civic friendship.  And so the wheel spins – good men, good laws; good laws, good men.

Conversely, when we stray from our constitutional patrimony by adopting alien political forms (such as group rights and the de facto destruction of citizenship’s obligations) and cleave to their moribund precepts of “compassionate” decay, we begin that uncontrolled downward tango of degeneracy — the polis unraveling. Even now, we are backsliding into irrelevance because we have abandoned the first principles that helped shape a once thriving people. In the shadow of today’s monstrous tyrannies that conspire to vanquish liberty’s last best hope on earth, who among us will stand heroic? Which man will risk all to revive a Phoenix?

Which each passing season we drift further from our Constitution’s anchorage and into the parched Horse Latitudes of our discontent. Under the watch of effeminates whose commanding meme is mocking passive-aggression, America has been reduced to the shadow of a toothless rambling King Lear whose greatest days lay behind in half forgotten odes. Yet, the means of our redemption is at our fingertips if we can rekindle a true reverence for our founder’s vision of personal and public virtue against the backdrop of a much minimized state.  This salvation, however, will only occur with a generational re-awakening — where civic piety and the customary facets of the enlightened American character are both taught and modeled.  But first, such a quest entails wresting control of a decrepit educational system from the clutches of crass global indoctrinators and self-interested mediocrities who have been charged with churning out compliant lotus eaters for their Master’s bidding.

In case you haven’t realized it by now, our families and schools are the battlegrounds where the future of the United States will be decided. Unless a great sea change occurs where the hearts of the children are turned to their fathers and the latter repent of their own moral and civic lethargy, there will be no Founding to return home to – only puzzling words on an arcane parchment in a glass case sepulcher. We must make it our business to resurrect those ideas that speak to a clear and noble purpose; one that citizens once reckoned themselves duty-bound to pledge their lives, their fortunes, and their sacred honors in service to.

Dennis Prager President Obama declared in his recent address to the nation that "ISIL is not Islamic." But how does...