In recent debates I have seen between various people representing muslims and the rest of the world, most recently thanks to the atrocities committed by the Islamic State, I have seen the same line quoted from koran by nearly all who wish to make it appear that Islam doesn’t sanction the killing of others no matter what the faith or group of the victim.

I wanted to link to the best article I have read on the subject so far which was written by Sonia Bailley but couldn’t find it. So I asked her if she would be kind enough to send it to me and allow me to republish it here so that I can find it and link to it in future when needs be. Which will likely be quite a bit. 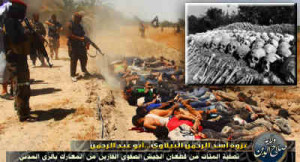 How typically deceptive it is when Muslims refer to koranic verse 5:32 claiming that saving one human being is like saving all of humanity. This analogy applies only when a Muslim is killed by a Jew. Muslims are attempting to prove that Islam cares about people of all religious faiths. It doesn’t.

First, verse 5:32 is Jewish in origin — it comes from Judaism, from the Jerusalem Talmud (Sanhedrin 4:1, 22a), and it refers to and protects people of ALL religions, unlike the koranic verse that followed later on. This is far from the only Islamic verse or concept snatched from Judaism. Others were pilfered from Christianity and Zoroastrianism.

Koranic verse 5:32 was meant only for Jews to follow, and protects Muslims in that Jews are forbidden to kill them. Jews are referred to explicitly at the beginning of the verse: “we decreed for the Children of Israel”.

Second, the purpose of this verse was not to instill or reveal benevolence in the Muslim, but rather to place aggressive restrictions on Jews regarding whom they can kill without punishment: Jews can only kill (a) in retaliation for manslaughter, and (b) non-Muslims for causing “corruption in the earth“ or fitna (Islam not being followed).

What the verse really says is that if a Jew kills a Muslim, it’s as if the Jew kills all of humanity, akin to genocide. In reality this quote justifies Islamic discrimination by protecting only Muslims from being killed, and places Jews under constant threat of heavy retaliation should one Jew kill a Muslim (see 5:33 below). Other koranic verses (and Islamic texts) reveal there is no manslaughter involved when Muslims kill non-Muslims.

When you cherry-pick from verse 5:32, as most Muslims do (and as Obama did in his Cairo speech in June 2009), it appears to condemn the killing of ALL humans by anyone. This is why parts of the verse are always purposely omitted by proselytizers of Islam when attempting to convert others. However, when understood in its entirety, this koranic verse permits and encourages the killing of non-Muslims by Jews.

If, as Muslims claim (based on 5:32), they cannot kill anyone of any religion, then you would expect, at the very least, that they not kill other Muslims. However, take a look around the world. Pick any country where death, oppression and destruction run rampant. You will see the extent to which Muslims with the power to kill (like ISIS) care about Muslims who are not considered to be Muslim enough (like Shiite or Ahmadi Muslims), let alone people of other religions, in order to avoid fitna (a state of disorder due to people not following Islam).

Here is koranic verse 5:32, which should be read in its entirety: “For that cause, we decreed for the Children of Israel, that whoever kills a human for reasons other than manslaughter or corruption in the earth, it shall be as if he had killed all mankind. And whoever saves the life of one, it shall be as if he had saved the life of all mankind. Our messengers came to them with clear proofs (of Allah’s sovereignty), but afterwards lo! Many of them become transgressors of the earth.”

Here is the next verse, 5:33, showing how to punish the disbelievers of Islam: “Indeed, the penalty for those who wage war against Allah and His Messenger and strive upon earth [to cause] corruption is none but that they be killed or crucified, or that their HANDS and FEET BE CUT OFF from opposite sides, or that they be exiled from the land. That is for them a disgrace in this world; and for them in the Hereafter is a great punishment.”

“Saving one human is like saving all of humanity” applies only when that human being is a Muslim. A life is worthy only when it follows Islam. Otherwise, it just doesn’t matter.

In Case You Missed It:  Trump takes the high road, Biden flings a slew of inflammatory race-tinged lies
Posted in Terrorism and tagged Islam, Muslims, Terrorism.

Democrats Must Keep Black Americans Poor to Stay in Power