NEW YORK – Prime Minister Benjamin Netanyahu met Sunday night with Indian Prime Minister Narendra Modi in New York, where both leaders are attending the United Nations General Assembly. This was the first meeting between an Israeli prime minister and the prime minister of India in over a decade.

Modi, who took office in May after a major electoral upheaval, is considered a bit exceptional in the Indian political landscape since he holds pro-Israeli views which he does not hesitate to express publicly. He even visited Israel in 2006. For his part, Netanyahu called to congratulate Modi 24 hours after his recent victory in the polls.

The populist Modi is controversial because of his nationalistic Hindu positions and his anti-Muslim stance, and when he served in the opposition, the United States government refused to grant him a visa because of those views.

Netanyahu sees Modi as a leader who is likely to have an impact on the nature of relations between their countries.

During their meeting at the Palace Hotel in New York, Netanyahu invited him for an official visit to Israel. If Modi indeed comes to Jerusalem, it will be considered a historic event for the two nations.

Despite ongoing strategic relations between the countries in the areas of defense, intelligence and agriculture, the Indian government has kept a low profile vis-a-vis the local media and the public when it comes to relations with the Jewish state.

Israeli foreign ministers have not visited India in recent years, nor have any presidents or prime ministers.

A spokesman for the India’s Ministry of External Affairs reported that Modi has taken note of the invitation and will discuss it via diplomatic channels.

In their meeting, Netanyahu raised the issue of the danger of a nuclear-armed Iran, as well as the global threat posed by Islamic terrorism. He also proposed that Israel and India cooperate in the realm of technology – especially that related to agriculture in arid areas and water management, according to the Prime Minister’s Office.

Furthermore, the Israeli premier updated his Indian counterpart about the decision to establish a national Israeli cyber-defense authority, and proposed bilateral cooperation in this area as well. Netanyahu asserted that cyber defense will constitute a significant economic factor in the future. Defense ties and cooperation in the field of computer software were also discussed.

At the start of the meeting, Netanyahu told Modi: “This is an opportunity for Israel and India to expand our relationship even further. We are two old peoples, some of the oldest in the nations on earth, but we are also two democracies. We’re proud of our rich traditions but we’re also eager to seize the future. I believe that if we work together we can do so with benefits to both our peoples.

“So in that spirit it’s a wonderful opportunity to see you here and I would like to invite you to come to Israel. I know you’ve been there before, it will be a pleasure to welcome you again. We’re very excited by the prospects of greater and greater ties with India, we think the sky is the limit.”

Said Modi: “I agree with [Prime Minister Netanyahu] that India-Israel relations are historical. I met this morning with the people from the Jewish community, American Jewish Committee, and they all appreciated that there is a deep recognition in Israel that India is the only country where anti-Semitism has never been allowed to come up, where Jews have never suffered and lived as an integral part of our society. There was a time in the city of Mumbai that Hebrew was officially taught in the university and even one of the mayors of Mumbai city was from a Jewish family.”

The Indian Prime Minister’s Office reported that the two leaders “reviewed the robust relationship, and rapidly growing trade. They also discussed how ties could be further expanded. The Israeli side briefed the prime minister on their perception of the situation in West Asia.” 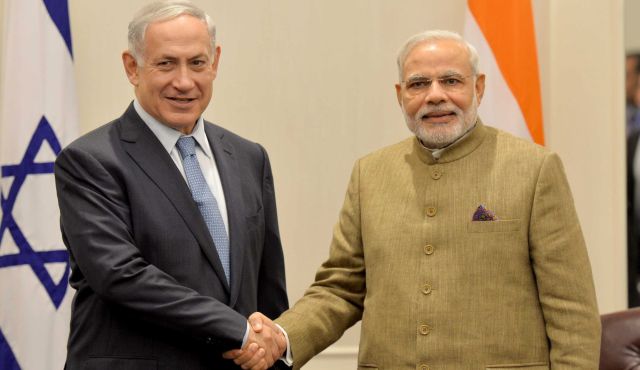 US lawmakers in strength at Modi’s reception

ZEE NEWS Modi Monday, September 29, 2014 - 09:46 New York: Several US lawmakers, including the only Indian-American Congressman and...