By Ed West:  Almost everyone in Europe knows about the Nakba, which followed the 1948 Arab-Israeli war; although most refugees fled on the advice of invading Arab armies, they have never been allowed back, and this is a running sore. Yet very few people know that 800,000 Jews were in turn forced out of Arab lands during this and subsequent years, on top of another 200,000 Jews from other Muslim countries such as Iran. 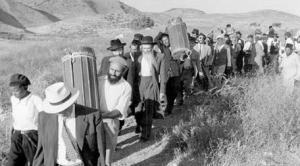 The Israeli-Palestinian conflict as far as most people know it runs like this: Jews came from Europe, bought up bits of Palestine until they were numerous enough (thanks partly to financial support from Americans) to take on the Arabs. They then beat them in a war and took their land. Yet this is only half the story.

The early to mid-20th century was a period of incredible demographic movement, and most of it was non-voluntary. Across the former Austro-Hungarian, Russian and Ottoman empires the growth in national consciousness and the demands for self-determination led to enormous forced population transfers. In the 1920s the climax of 200 years of Greek-Turkish hatred resulted in the movement of 500,000 Turks and 1,000,000 Greeks. When India was partitioned over seven million Muslims left for Pakistan and a similar number of Hindus and Sikhs moved the other way.

And if one takes the view that Palestine was not a nation before its conflict with the Israelis formed a national consciousness but part of Transjordan, then the transfer of Arabs out of Palestine and Jews in is not unusual for the era. Tragic, yes, but not unusual. Populations were always moved where competing groups vied for sovereignty, and while one can lament the older, more tolerant and more diverse world, from belle époque Vienna to pre-Nasser Egypt to the old Constantinople, one cannot blame groups for wishing independence.

The Jews could have rejected a separatist vision, of course, and taken their chances in Muslim Arab-dominated countries, but the recent history of Middle Eastern Christians suggests that they were wise not to (other minorities, such as the Lebanese Maronites and Iraqi Assyrians, were promised national homelands at various points but nothing came of it, and neither now have especially rosy futures).

The partitions were not always fair, of course: the UN partition plan of 1947 – or even the earlier Peel commission – would have been more just, but the Arab leadership refused both.

Everywhere where these transfers happened there was great suffering and injustice, and the same goes for the Jews forced out of Arab countries. The story of Iraq’s Jews is especially sad even for the standards of the last century; a 2500-year-old community was destroyed in months, with ancient families who had lived among Baghdad’s plushest districts for generations finding themselves homeless and impoverished in an alien land. Just like the Palestinians forced over the border, in fact. The difference is that the Israelis did not keep Arab Jews in camps for 60 years to prove a point, but helped them to integrate. I guess that’s why third-generation Syrian-Israelis aren’t clamouring at the border for their right to return.

In Case You Missed It:  DoD data show that 60% of "covid" hospitalizations in 65 and older patients are "fully vaccinated"
Posted in Freedoms.