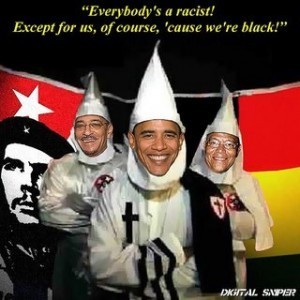 The ideology that has grabbed a hold of Ferguson is the same one that destroyed Detroit. Black Nationalism.

Imagine mixing a little Marxism, a generous portion of Islamism, and throwing in bits and pieces of class envy, class warfare, and a compromised version of Christianity that Jesus Christ would fail to recognize, stir it all together with a generous portion of anger and hate thrown in, and you’ve got Black Nationalism.

Black Nationalism was behind the Black Power Movement, and its anti-American agenda is poised to emerge again as a fierce and violent addition to the American mosaic, once again. The New Black Panthers are a part of this violent ideology, as are Nation of Islam racist Louis Farrakhan, and false reverends Jeremiah Wright, Al Sharpton, and Jessie Jackson. They profit from the perpetuation of racism in America, or at least the accusation of the perpetuation of racism in America, and like the hard left deconstructionists of the Democrat Party, their goal is singularly focused on destroying the United States as it was founded. They hate the concept of limited government and a free market system. They abhor individualism. And they claim that supporting such concepts is racist, bigoted, and immoral.

The black population is burning American flags, and destroying their own neighborhoods, in Ferguson, Missouri. Those people, unfortunately, are not thinking like intelligent individuals. They are tools. They are following their conditioning. They are nothing more than mindless tools being used by the conspiracy of Black Nationalism, and the hard left agenda. They claim they are angry, and they hope for change from whatever system they believe we have, but instead they are putting shackles around their ankles in the false name of peace and utopia. Change doesn’t happen by destroying your hometown and succumbing to some big government ideology that teaches hate and destruction. Change happens inside, when we decide we’ve had enough, but instead of going on the warpath, we become self-reliant, responsible, change with whom associate, and use our freedoms to demand that the government return back to its original form that embraced liberty, a free market, and a limited federal government that does not micro-manage our lives at the local level.

A political ruling elite lusting for a global order are setting us against each other. They are trying to create crisis, and racism is the easiest tool at their disposal. Generations of Americans have been trained to believe falsehoods, and to war against each other without really knowing the reason why. We are told that only white people can be racist, and all of them probably are. If someone has been handed a lousy hand in life, it’s not their fault, it’s the fault of somebody else. We have been taught we are all victims of one kind or another. Slavery, stringent laws, big corporations, our parents, Christianity, the republicans, and a whole slew of historical figures that used their wealth to get power and their power to get wealth, we are told, are the cause of all of the woes of society. . . but government will make it all better. Government will tell you how to act, where to live, what to eat, and provide a minimum mediocrity of a life through welfare services, food stamps, and a housing program. You may be miserable under the government’s programs, but everyone will be equal—equally miserable. Nobody will be able to be a greedy business owner. Government will take care of all of those things. All the government asks in return is that you raise your children in their institutions with their curriculums and their version of morality, lay down any arms you may have to protect yourself and only allow the government to be armed (it is for your protection, of course), and give the reigning political party your undying loyalty every election because if you don’t, your subsistence from them will be cut off by the heartless republicans.

“Don’t worry,” we are told. “The government cares, and will make everything okay. All you have to do is give up a little freedom for security, and the government will make the problems go away.”

Before long, we will be told that the real problems we have in society are being committed by those radicals that stand against the increase of the size and scope of government. You know, like those crazy anti-government anti-science racist Tea Party people and members of the GOP. All we have to do is silence them with political correctness, and an bring in an onslaught of new people willing to join the Reich. Many of them are already here, and some are still arriving, from south of the border, and from the Middle East.

“Trust Us. We are your friends.”

The message to Ferguson was delivered through generations of conditioning. Create crisis, fall for the message that there is racial division, and Americans are cowards for not facing the race issue the way the leftists say to. Burn down your city, and demand all of the things Black Nationalism calls for.

The government will take care of everything, after you are done. We will rebuild, and be stronger than ever under a new system, a system brought forth by the wonderful and caring politicians that are currently implementing more intrusive government programs.

“Trust Us. We are your friends.”

After months of unrest in Ferguson, Missouri, the problems continue. In fact, in many ways, the perceived need for authorities to crack down to quell the violence has increased. Arrests have been spotty and selective, and the protests are non-stop. The police are expected to protect the public, as they are being investigated for questionable practices that may, or may not, be what they seem.

The number of arrests is in the hundreds, many for violating unwritten rules, and committing minor offenses. Curfew, and violation of the noise ordinance, has been used to control the population and arrest as many people as needed.

We have a right to peaceably assemble, but have the protesters in Ferguson been peaceful? Is this something that can be compared to insurrection, or are the police overreacting? Is there ever a good excuse for armed military style officers to march through city streets, using armored personnel carriers, and military style tactics and weaponry?

Perhaps this is just practice for when the real domestic terrorists start shooting up the place. You know, those violent, Bible-thumping gun-toting racist Tea Party extremists?

But why won’t it end? Why is Ferguson even still in the news? Why are the protests continuing after months of demonstrations?

The Obama administration is pin-pricking Ferguson in the same way they are pretending to use military force against ISIS in Syria and Iraq. The goal is to keep the crisis in place, while looking like the White House is doing something about it. Crisis creates opportunity. Obama wants ISIS to continue their rampage in the Middle East, and he wants the Black Nationalists in Ferguson to continue to march, protest, burn, and destroy. I am convinced that Barack Obama hopes the face of Ferguson will change, and that Islamism will join the Black Nationalists, to make it a real crisis, and demand government action in ways we haven’t seen since troops were brought into Arkansas to force integration of our schools.

Between the spread of race riots (emanating outward from Ferguson), and infectious diseases (Ebola, Enterovirus D68, Tuberculosis, Scabies, etc.), Obama and his minions will have no choice but to institute martial law, and suspend elections.

Will all of that happen? I don’t know, but I am sure it is all on Obama’s wishlist.

The leftists want the region to stay a war zone, and they want Ferguson to continue to be in the news. The static noise is perfect.

Understand, a large portion of the protesters don’t even live in Ferguson. They are being shipped in. The leftists want the region to stay a war zone, and they want Ferguson to continue to be in the news. The static noise is perfect. The distraction is serving its purpose. It is moving some of the nation’s eyes away from the scandals, away from Trey Gowdy’s blistering rants on the floor of Congress, and away from the obvious failures of the administration. They want us to concentrate on the racism in America, the poor black people that, even under Obama, are facing oppression from racist white cops. And for those of you who don’t care about what is going on in Ferguson, pull out your phone, or game system. There’s nothing to see here. Move along, and vote Democrat in November. Obama has it all under control. The President is busy fighting “The Man” for you, so that someday “The Man” will be nothing more but a piece of forgotten history, along with the Declaration of Independence, the United States Constitution, and those racist white old guys that created the racist American System.

That is their message.

You are only tools. The ruling elite are the only ones capable of recognizing what is best for society, and don’t you worry, they will make sure they force it upon everyone, while making it look like it is exactly what you are asking for. You will raise the red flag of socialism yourselves, and you will do it enthusiastically, and because you have come to believe that raising that flag of tyranny is the only way to achieve peace and safety.
Black Nationalism – Stanford University

War against ISIS: US Strategy in tatters as militants march on – U.K. Independent

The Washington Post’s Bob Woodward, who has chronicled U.S. military action in Iraq for years, said today that America and the world are...