A new report of “economic freedom” around the world finds the US ranked 12th among 152 countries, tied with the United Kingdom, and lower than neighbor Canada or Australia. The index, published by the Cato Institute and Canada’s Fraser Institute, has been published since 1996. As recently as 2000, the US ranked 2nd in the world, in terms of boasting a free economy. The US’s declining ranking will lower future economic growth. 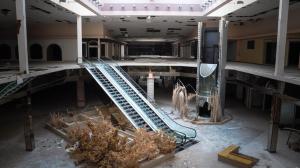 Abandoned mall due to liberal policies.

The index, built on decades of research by Nobel laureates and dozens of leading scholars,measures 5 broad factors that impact the economy: 1. Size of government; 2. Legal structure and security of property rights; 3. Access to sound money; 4. Freedom to trade internationally and; 5. Regulation of Credit, Labor and Business. Countries where citizens are freer to engage in business and trade and property and legal rights are protected by the rule of law will score higher on the index. According to economic research, though, these countries will also do better economically and create and generate more wealth.

America’s descent down the ladder of economic freedom is unsettling, in itself. More troubling, however, is the chief factor behind the US decline. The biggest drop in US economic freedom has been in the country’s legal structure. The report notes that, “increased use of eminent domain to transfer property to powerful political interests, the ramifications of the wars on terrorism and drugs, and the violation of the property rights of bondholders in the auto-bailout case have weakened the tradition of strong adherence to the rule of law in United States.”

The rule of law has long been the foundation of America’s economic prosperity and liberty. The US ranking in this area has plummeted to a terrible 36th place in the world. This, combined with increased regulation is stifling US economic growth. The report observes, “[t]o a large degree, the United States has experienced a significant move away from rule of law and toward a highly regulated, politicized, and heavily policed state.”

The report estimates the cost of the decline of economic freedom in the US. On current trends, future economic growth will be half the historic average of a 3% yearly gain. The past few years have schooled us on the impact low growth has on the labor market and economic outlook.

This latest report is a sobering look at the scale of challenges facing the US. Curtailing government’s leviathan isn’t simply solving a math problem, i.e. getting revenue and spending figures for government to balance. A far larger threat is the accumulation of thousands of rules and regulations that not only stifle innovation but also undermine our personal and property rights.

A balanced federal budget is insignificant and meaningless if the rule of law has been subverted. No single election or administration can repair that damage. That is a task that must be tackled by a generation.

In Case You Missed It:  ROGER STONE EXCLUSIVE: The Government’s Stunning Admission That There Was No Evidence Against Stone Regarding January 6th Events
Posted in Financial, Tyranny and tagged Economy, Obama, Obamanomics, Recession, Taxation, United Socialist States of America.

A 26-year-old nurse named Nina Pham is the health care worker at a Dallas hospital who tested positive for the Ebola...