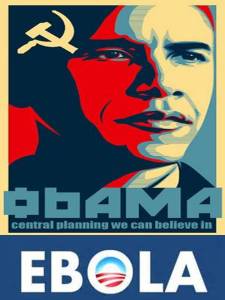 “There are no more independent voices that we know are in medicine or science anymore,” the conservative radio icon told Breitbart News.

Savage, a PhD from the University of California who studied epidemiology as well as botany and nutrition, has been studying epidemics for a long time and insists that the Obama administration has violated “every rule of science, medicine, public health, and epidemiology.” He said passionately, “What Obama is doing is a crime against humanity. There is no other way around this, it is all lies.”
As far as Ebola is concerned, Savage says, “If you like your Ebola, you can keep your Ebola; it is part of the new Obamacare plan.”

Also today Senator Rand Paul has accused Barack Obama of downplaying the threat posed by Ebola for political purposes, alleging that the President has “failed to show leadership” on the issue. In an interview this morning with Talk Radio 1210 WPHT, the Kentucky Senator was asked by host Dom Giordano if the Ebola outbreak was morphing into an issue of incompetence and the White House “lying to the American people.”

In the mean while the Caribbean island of St. Lucia issued an order Wednesday to immediately bar entry to travelers coming from three West African nations overwhelmed with Ebola epidemics.The Colombian government in South America later announced it would not allow in anyone who has traveled to five African nations within the preceding four weeks. While the Obama administration is still allowing flights from afflicted countries.

Fortunately, it’s not too late to control the Ebola situation, says Savage, and he believes that epidemics can be contained and controlled. The big word is “quarantine,” he emphasized.

“If you look at Africa, at the Ebola-stricken nations, the surrounding African nations have forbidden all travel between the nations that are stricken and their own. What does that tell us? That third world dictatorships in Africa are run by more intelligent men than Barack Obama presidency,” he said.

here is no cure for Ebola, which can result in organ failure and massive internal bleeding. The virus can be transmitted through direct contact with the blood or secretions of an infected person or objects contaminated with the infected secretions.

In Case You Missed It:  Rep. Bobby Rush Of Illinois Is 24th Democrat To Announce He Is Not Running For Reelection In 2022
Posted in Tyranny and tagged Africa, Airport, Ebola, Health And Human Services, Jetliner, lie, Obama, United Socialist States of America, White House.

A jaw-dropping report released by the World Health Organization on October 14, 2014 reveals that 1 in 20 Ebola infections...