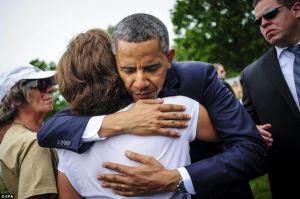 “I shook hands with, hugged, and kissed, not the doctors, but a couple of the nurses at Emory because of the valiant work that they did. In treating one of the patients, they followed the protocols, they knew what they were doing, and I felt perfectly safe doing so,” Obama was quoted as saying by Huffington Post.

On Wednesday, Obama held a meeting with his top cabinet secretaries about how to best combat the virus. The president expressed his confidence  the government is capable of taking effective measure against Ebola.

“I am absolutely confident that we can prevent a serious outbreak of the disease here in the United States, but it becomes more difficult to do so if this epidemic of Ebola rages out of control in West Africa. If it does, then it will spread globally in an age of frequent travel and the kind of constant interactions that people have across borders,” Obama said following the meeting.

The first Ebola case inside the United States was confirmed earlier this month. On October 8, Liberian national Thomas Eric Duncan died of Ebola at the Texas Health Presbyterian Hospital. Two nurses consequently contracted the virus. They are the only people diagnosed with Ebola in the country so far.

According to the World Health Organization, currently almost 9,000 people are infected with the deadly virus, 4,500 have died from Ebola so far.