Calling it “an irresponsible overreach of the executive branch’s authority,” Senator Charles Grassley, ranking Republican on the Judiciary Committee, is criticizing an executive order issued by the president that would allow at least 100,000 Haitian nationals into the United States to be “reunited with their families.” 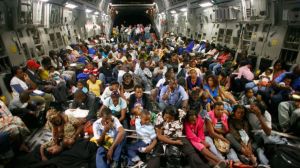 “Which countries are next on President Obama’s list?” Mr. Grassley said. “Will there by medical screenings before entry? Will work permits be granted automatically? How will this affect American workers?”

U.S. Citizenship and Immigration Services, the branch of the Department of Homeland Security that handles immigration benefits cases, announced Friday the program to unite Haitians already living in the U.S. with family members abroad will ramp up in 2015.

At that time the State Department’s National Visa Center will begin notifying families who may be eligible to take part in the program. Those immigrants will allowed to apply for work permits while waiting for issuance of their permanent visas.

The agency said the program will expedite “safe, legal and orderly migration.”

A similar program that reunited Central American children with their parents had a fraud rate of about 70%.

Read the rest of the story at American Thinker.

In Case You Missed It:  POLL: Trust In Media Sinks To Just 36 Percent – Second Lowest Ever
Posted in Tyranny and tagged Immigration, Liberalism, Obama, United Socialist States of America.

President Obama today turned to a trusted lawyer and political operative to become the nation’s “Ebola czar,” charged with managing...