Experts say Ebola might be quietly inoculating a significant portion of the population—people who are exposed to the virus but never succumb to it or show symptoms of infection. 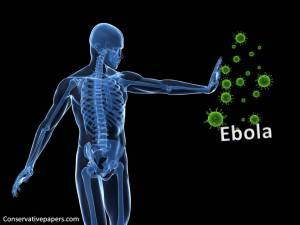 If those individuals have acquired an immunity to Ebola, the strategies for the intervention and treatment of the disease need to be reconsidered, according to the letter published online yesterday in The Lancet.

“If infection without disease protects people from future Ebola infections and illness, the epidemic should decline sooner than currently predicted and affect a smaller number of people,” says Juliet Pulliam, one of the letter’s authors and an assistant professor of biology at the University of Florida and its Emerging Pathogens Institute.

The authors, led by postdoctoral fellow Steve Bellan at the University of Texas at Austin, looked at studies done in the aftermath of an outbreak.

“We want to know whether people who are infected without getting sick become immune,” Pulliam says. “If these people are protected from future infections, this would open up new opportunities for controlling the disease.”

The letter suggests the asymptomatic individuals can help slow the spread of Ebola in two important ways: They can be recruited to work as caregivers in high-risk communities, and their natural immunity may make them prime candidates for donating blood for transfusions.

“Ultimately, knowing whether a large segment of the population in the afflicted regions are immune to Ebola could save lives,” Bellan notes.

“If we can reliably identify who they are, they could become people who help with disease-control tasks, and that would prevent exposing others who aren’t immune. We might not have to wait until we have a vaccine to use immune individuals to reduce the spread of disease.”

“If we can take advantage of natural immunity within the affected communities, we may be able impact the course of the epidemic even before a vaccine becomes available,” Pulliam adds.

“Even if current projections overestimate how big this epidemic will become, its effects are devastating, and a global effort to control the spread of Ebola within West Africa remains imperative,” she adds.

In Case You Missed It:  “TruckPOCALYPSE” begins in California this week as 70,000 truckers forced off the roads due to Democrat idiocracy
Posted in Freedoms and tagged Ebola, Health And Human Services.

Obama Puts Africa Before the USA

Obama is so damned transparent,  he wants Americans dead.  He worries more about the African economy than our own.  He really...