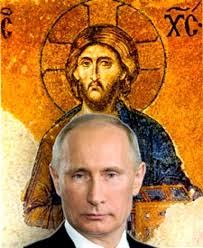 He’s a world-class diplomat. He embarrasses his Western counterparts. They’re no match for his forthrightness. Straight talk. Candor. Telling it like it is. Explaining what everyone needs to know.

Paul Craig Roberts is right calling Russia the world’s moral leader. At a time America descends into tyranny. Waging war on humanity. At home and abroad.

Neocons infest Washington. They’ve been around for decades. Political and military ones. Advocating permanent wars. Wanting all US rivals eliminated.

JFK transformed himself in office from warrior to peacemaker. He wanted all nuclear weapons abolished. A “general and complete disarmament.”

Rapprochement with Soviet Russia. The Cold War ended. All US forces out of Vietnam by December 1965.

He regretted the gap between intellectuals and politicians. Working cooperatively improves chances for responsible policies, he believed.

He deplored “craz(ies)” urging war. Wanting Soviet Russia nuked while America was advantaged. Even at a cost of a few US cities.

During the October 1962 Cuban missile crisis, he “never had the slightest intention” of attacking to remove them.

It bears repeating. Obama is no Jack Kennedy. He’s polar opposite on major issues mattering most. John Kerry reflects his views.

So does Defense Secretary Chuck Hagel. He outraged Moscow saying “we must deal with a revisionist Russia – with its modern and capable army – on NATO’s doorstep.”

Anti-Russian propaganda drowns out what everyone needs to know. It’s intense. Unprecedented.

Lavrov’s comments are important. He’s on the right side of history. He champions peace and security. Ukrainian crisis conditions reflect Western European/US contradictions.

“Pardon us for our country’s existence in the middle of your military bases,” he said.

“Washington has openly declared its right to use military force unilaterally and wherever it sees fit in order to protect its own interests.”

“The Western alliance, led by the United States, while defending democracy and human rights, on the global arena assumes an opposite stance, disregarding the principle of the sovereign equality of states, as stipulated in the UN Charter, and trying to decide for others what is good and what is bad.”

“Western partners have ignored our numerous warnings, concerning the inadmissibility of breaking the UN Charter and Helsinki Final Act principles, consistently evaded proper collaboration on creating a zone of equal and undivided security and cooperation in the area from the Atlantic to Pacific Oceans,” he added.

“The United States and the European Union supported the coup in Ukraine, blindly approved any actions taken by the self-proclaimed Kiev authorities that directed their efforts at violently suppressing the part of the Ukrainian people that rejected the attempts to impose on the country anti-constitutional order and wanted to defend its right to native language, culture and history.”

Lavrov discussed his Paris Kerry/Fabius meeting. It covered a wide range of issues, he said. Including strained bilateral relations.

Differences remain, he explained. It’s “in our common interests to seek” responsible solutions. “(T)hrough a respectful dialogue based on equal agreements and taking into account each other’s interests.”

Iraq, Syria, Afghanistan an Ukraine were discussed. “We talked about the efforts Russian leadership is exerting to ensure complete and comprehensive compliance with the agreements achieved with our support and with the cooperation of the OSCE between the Kiev authorities and the representatives of the self-defence forces,” Lavrov said.

“I am referring to the Minsk Protocol, signed on 5 September, and the Minsk Memorandum of 19 September 2014.”

“The main thing now is to not ‘water down’ the process that has been set in motion, not to divert attention to some artificial formats being proposed but to get the participants in the Minsk process to fully comply with the accords between Kiev, Lugansk and Donetsk.”

“This applies to the cease-fire, the separation of forces, the pulling back of heavy weapons and, most importantly, the start of a comprehensive political dialogue that the Ukrainian authorities promised as early as April of this year when the foreign ministers of Russia, the US and Ukraine met in Geneva and proclaimed the need for an immediate start to a political dialogue involving all the regions and political forces in Ukraine.”

He elaborated further on what he called “the Ukrainian tragedy,” saying:

“We have constantly and at all levels reaffirmed our position and demanded a concrete reaction on the part of the relevant international organisations.”

“Our position is that all the crimes perpetrated during the course of the Ukrainian crisis must be investigated, beginning with the ‘snipers’ case’ on Maidan Square, including the tragedies in Odessa and Mariupol, the Malaysian plane catastrophe, the mass graves and many other incidents that have become known to the public.”

“We believe that international organisations, notably the Council of Europe, the OSCE and the UN human rights bodies, must take the initiative and assume a greater share of the responsibility for carrying through with these investigations because the Ukrainian authorities obviously are not doing enough.”

“One would not like to suspect anyone of anything, but one does have the impression that they have something to hide. The international organisations must not allow this to happen.”

“(T)he Ukrainian crisis can only be resolved through direct talks and the reaching of an accord between the conflicting sides. This is precisely what the Minsk process implies.”

Beginning with ceasefire and political dialogue, Lavrov stressed. “(W)hich has yet to begin,” he added.

Kerry and other Western officials shouldn’t “try to invent something new.” The should “fully and honestly comply with the existing accords.”

Lavrov hopes ongoing P5+1 talks on Iran’s nuclear program will “achieve an early an comprehensive agreement…” Remaining issues to be resolved aren’t “all that complicated,” he said.

Russia “consistently” fights terrorism. It’s done so for many years. It helps other countries address their threats.

An anti-terror group was established under the auspices of the Russian/US Bilateral Presidential Commission. Both sides agreed to share relevant information.

“(T)he future of humankind depends on our ability to develop equitable and productive cooperation.”

“Mutual trust as an element of international relations is decreasing at an alarming pace amid deep structural changes in the world, and the skill of finding compromises and mutually acceptable solutions, which alone can provide the basis for effective cooperation, is being eroded.”

“Some countries still interpret agreement solely as the acceptance of their views and think that they can ignore the legitimate interests of their partners and dictate their rules in the economy, politics, finance and trade.”

“This is deepening chaos in international relations and expanding the area of crises to vast territories in the Middle East and North Africa, and now to Ukraine.”

Nothing less is acceptable. Equal security and mutual respect for all parties’ interests are essential. Preventing regional and global conflicts depend on them.

“We firmly stand for harmonising integration processes in Europe, Eurasia and the Asia-Pacific Region,” said Lavrov.

“Russia is ready to use its geographic position, resources and human capital towards this end.”

It’ll “continue to increase its contribution to the development of practical cooperation between the ASEM member-countries based on a balance of interests, including by advocating the global agenda for post-2015 development, enhancing the effectiveness and coordination of emergency response cooperation, searching for sustainable solutions to climate change and energy efficiency issues, and by promoting dialogue on human rights issues based on mutual respect.”

“In these tumultuous times, it is vitally important to strengthen the ethical foundations of international relations by relying on traditional values that constitute the moral basis of universal solidarity.”

“Russia is willing to continue cooperating with all the ASEM partners to strengthen ASEM’s role in the effort to create a safer and more democratic and effective international system.”

In contrast, Washington’s rhetoric rings hollow. Obama, Kerry, Hagel and other US officials lie. They say one thing. They do another.

They ravage and destroy one country after another. Murdering millions in cold blood. Inflicting appalling human misery.

For unchallenged dominance. Resource control. The right to exert might because who’ll stop it. Exploiting world populations.

Declaring itself world sovereign. Demanding all nations bend to its will. Mindless of rule of law principles.

Or sovereign independent rights. Or right over wrong. Or doing the right thing because it matters.

Hegemons operate this way. They do what they damn please. None in world history match US ruthlessness. Thankfully Putin’s Russia exists.

“Attempts to…pressure (it) and…compel it to abandon its values, truth, and justice have no prospects whatever for success,” Lavrov stresses.

US “polic(ies) of ultimatums and supremacy and domination do not meet the requirements of the 21st century, and run counter to the objective process of developing a polycentric and democratic world order,” he added.

Washington’s unilateral use of military force threatens world peace. Russia is polar opposite. It deplores war. It champions peace and stability.

It goes all-out to achieve them. It’s maliciously bashed for doing so. Big Lies substitute for explaining its responsible policies.

“save succeeding generations from the scourge of war…;”

assure justice and international law is respected; and

Failure followed on all counts. Hamstrung by US imperial lawlessness. Its violation of fundamental civil and human rights. Its contempt for democratic values. Its rage for war.

Conditions today are more perilous than ever. World peace hangs by a thread.

Stephen Lendman lives in Chicago. He can be reached at [email protected]

His new book as editor and contributor is titled “Flashpoint in Ukraine: US Drive for Hegemony Risks WW III.”

Visit his blog site at sjlendman.blogspot.com.

In Case You Missed It:  Abortion isn’t “reproductive health,” it’s the MURDER of an individual human being
Posted in Freedoms and tagged Eastern Europe, Russia, Vladimir Putin.

Are Some People Immune to Ebola?

Experts say Ebola might be quietly inoculating a significant portion of the population—people who are exposed to the virus but...