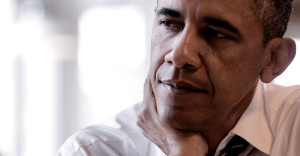 Obama’s approval ratings and MSNBC’s viewer ratings are in a close race to the bottom of Death Valley. It’s only a question of which set of obnoxious hipsters with a head full of bad policy ideas and no real life experience will be fired first; the Maddow crew or the White House staff.

The progressive pajama boy era is over. The asexual messenger bag toting wonk has met an ISIS Jihadist and run home to its non-traditional family. Liberalism isn’t over, but its contenders are trying to butch up their act.

The second coming of Hillary is accompanied by bellicose rhetoric about Putin and Syria. Leon Panetta, her gnomish errand boy, is sneering at Obama as an egghead too busy dithering about what not to do to be able to actually do anything about ISIS.

Democrats are adjusting to a new reality of less nuance and more centrist politics. So is MSNBC.

If Obama loses the Senate, then his leftist backers also lose their death grip on the Democratic Party. And that’s why they’re panicking so badly. Progressives proved that money and media bias could let them get away with anything. But then they lost in 2010, barely hung on in 2012 and are heading for a beating in 2014. If they can’t buy the Senate now, the Democratic Party will have to correct its course.

A sober analysis of the Big Billionaire Left shows that they were good at getting Obama elected, but not much else. Like the USSR, they could pour a lot of energy and capital into inefficiently getting one big thing done, but they aren’t much good at doing a lot of little things. Their hijacking of democracy ran into trouble the moment they tried to push past the White House. It was only the White House’s hijacking of democracy by trying to function as a unilateral dictatorship of pen and phone that extended their influence beyond their initial defeat in 2010. And that came with its own price in popularity.

Obama’s arrogance isolated him politically. He insisted on running everything and is stuck with the bill. In countless speeches he demanded more power and authority; his sinking approval ratings reflect the growing willingness of even his own supporters to hold him responsible for his unilateral policymaking.

As the election approaches everything that could have gone wrong has gone wrong. Not only did Obama’s aggressive efforts to stoke racial unrest on the border and in Ferguson to turn out the minority voters who generally sit out midterm elections backfire, but the resulting messes deepened the popular impression that he was in over his head. Now instead of pivoting from Global Warming to a minimum wage to some offensive thing that some local Republican somewhere said, the media is stuck in an Ebola-ISIS cycle that reminds Americans on a daily basis that everything really is out of control.

The critiques from even friendly media outlets keep throwing around words and terms like “detached”, “in over his head”, “flailing” and “too smart for his own good”. That word salad adds up to the same message as the one being peddled by Leon Panetta; America needs strong experienced leadership.

And Obama isn’t it.

Obama is already receding into the imagination of liberals as the youthful folly of a political Age of Aquarius when millennials tried to levitate the Pentagon by electing a brash inexperienced community organizer to fix the world. They are writing him off as an act of political naiveté by a war-traumatized generation still unaware of the practical limits of the real world.

And that infuriates and terrifies the left worse than anything else. The left can thrive on hostility, but it hates being dismissed by its fellow travelers as naive idealists who don’t understand the real world.

But that’s the historical revisionism that had been prepped and waiting in the wings all along for Obama. What the right does wrong is always attributed to malice, while the left’s worst atrocities from the Gulags to the killing fields are put down to idealism gone wrong. Obama takes his place somewhere between Mao and Eugene McCarthy as the Democratic Party rushes to reinvent itself as the adult party of serious experienced political leaders like Hillary Clinton. Its message is that it’s time for the Obama pajama boys to grow up and compromise on their progressive politics by voting for Hillary in 2016.

The left has few options left. Money can only buy so many votes. If Obama’s base stays home, then the magical turnout operation starts looking like a lot of political consultants taking credit for the Oprah tilt of black women coming out to vote for Obama. And there is no obvious replacement for Obama.

In New York City, Mayor Bill de Blasio was supposed to inaugurate a new era of progressive politics by pushing so far to the left as to make Obama look like Bob Dole. Instead Bill de Blasio has been tagged by the same progressive incompetent moniker as Obama. The analogy is being drawn explicitly by liberals even in left-of-center publications like the New York Times and the Daily News.

Bill de Blasio didn’t extend the progressive lifespan. He was elected just in time for everyone to be primed to expect the Obama progressive cycle of self-righteous cover-ups, thin-skinned media wars and grandiose policy announcements that go nowhere. The political future of the progressive mayor has been Obamanized off the scene. And that leaves few great hopes for the progressive cause.

Elizabeth Warren still fakes left, but she seems to know her limitations. 2018’s midterm election without a president on the ballot and a different demographic makeup for the electorate could easily topple her. If she tried for the big chair, she would be run over by harder Democrat candidates faking centrist. And without Warren, all that’s left are clown acts like Bernie Sanders and Seattle Socialist Kshama Sawant. 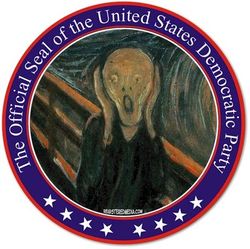 The progressive resurgence was powered by leftist billionaires and non-profits chasing power. They have the money and the organization, but they don’t have the candidates. Six years of Obama produced compelling conservative figures like Ted Cruz, Trey Gowdy and Mike Lee. There’s no equivalent to them on the left. It’s why liberal billionaire election spending is characterized more by the candidates that they are against rather than the ones that they are for. They have spent so much time and money battling the Tea Party that they have failed to build a post-Obama political future for their movement.

The liberal verdict on the age of Obama has been written. It may change with history, but for now the Hope and Change period will be praised for its idealism and its innovative political organizing, but dismissed for its policy incompetence and its inability to listen to voices outside its bubble. It was an elitist phenomenon whose diversity was faked with media imagery and the party will now work to try and recapture its lost position among the rest of the country, particularly among white Democrats.

The progressive will continue to haunt American politics, but his current hipster incarnation is headed for extinction.

In Case You Missed It:  HILARIOUS: ‘Let’s Go Brandon’ Has Been Turned Into A Hip-Hop Song That’s Now #1 On iTunes (VIDEO)
Posted in Tyranny and tagged Democrats, Liberalism, Obama, United Socialist States of America.

Every once in a while a case comes along where I am tempted to suggest that we skip a few...